SEBRING, Fla. (WFLA) — A Florida National Guard solider is dead and five others were injured after a chain reaction crash involving military vehicles in Sebring, according to officials. 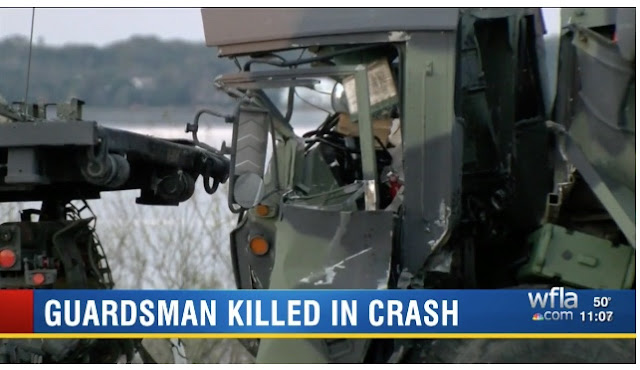 The Sebring Police Department was called to the intersection of US 27 and Hammock Road shortly before 1 p.m.

A preliminary investigation revealed three Palletized Load System (PLS) vehicles, which are assigned to a National Guard unit out of Miami, collided in a chain reaction crash, according to officials.

Officials said the convoy was traveling north on the highway when the third vehicle failed to stop for a red light in time and hit the second vehicle, officials said.

The driver of the third vehicle sustained fatal injuries, according to investigators.

Officials said the passenger had to be extricated from the damaged vehicle.

According to officials, the passenger and four others were taken to area hospitals. Police said they suffered non-life threatening injuries.
read more here

Posted by Kathie Costos at 7:25 AM