The U.S. Army has provided details on investigations into three Fort Riley soldier deaths that occurred in 2017, two of which appear to have been self-inflicted.
Records indicate the cases are still under investigation by local agencies, and the Army continues to say the cause of each death is undetermined. The Mercury requested information on seven of the 12 non-combat-related soldier deaths that have occurred since June 2017, those that appear to have been suicides. The Army so far has returned documents on three.
In the first, a Junction City Police Department detective found Staff Sgt. Garett Swift, 37, “hanging in the backyard of his residence” in Junction City at 5:30 p.m. Sept. 4, according to one report.
read more here 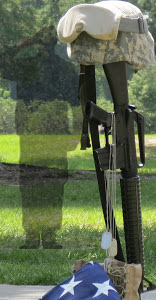 Posted by Kathie Costos at 7:45 AM