Iraq Veteran did not settle for joining VFW, he took command


Since he returned from his second tour in Iraq, Peter Yarmel has helped renovate the basement, add new sheetrock and fix the plumbing of Veterans of Foreign Wars Post No. 1790’s building, at 65 East Merrick Road in Valley Stream. 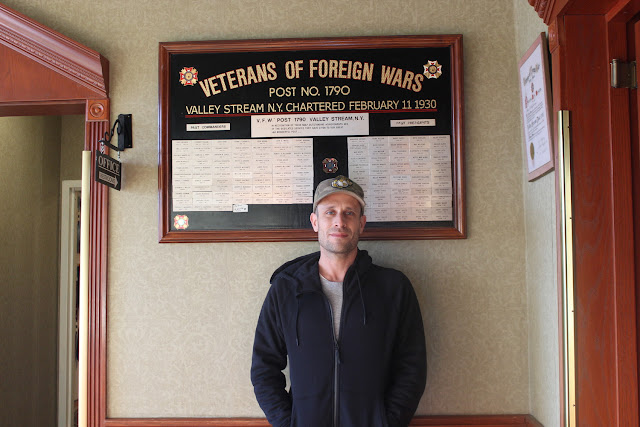 Now, he serves as the commander of the post he helped restore.
Yarmel, a 39-year-old Valley Stream native who currently lives in Lynbrook, also served on the post’s bartending and cleanup committees, according to Al Goldberg, a Vietnam veteran. “He’s a hard worker, cares deeply for the post and put in a lot of time,” Goldberg said.
Yarmel did not campaign for the commander position. As the senior vice commander, he took over in November after Commander Joe Marando died of lymphoma at age 84. “I got really close to Joe… so he kind of handed the reins over to me when he was starting to get sick,” Yarmel said. He became the senior vice commander over a year ago.
Yarmel served in the Marine Corps for two tours in Iraq, both of which lasted seven months.
His first tour was from January 2003 to July 2003. During that time, he served as a radio field operator for a shock trauma platoon. Yarmel radioed for Medivacs to get injured soldiers off the battlefield and transport them to a hospital.
“We were right there in the battlefield,” Yarmel said. “We went and got ’em, surgeons did what they had to real quick and patched them up, and sent them back to the real hospitals.”
read more here
Posted by Kathie Costos at 9:03 AM