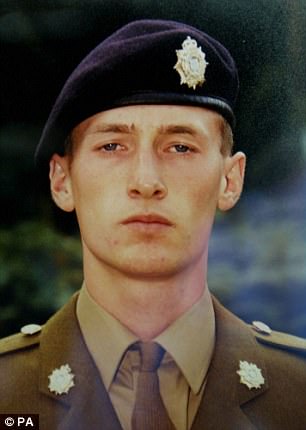 He told the inquest in Woking, Surrey today that former sergeant Andrew Gavaghan jumped out of a makeshift coffin - which had originally been filled with sandbags - as soldiers carried it during a practice session ahead of the funeral.


A former Army sergeant hid inside and jumped out of a makeshift coffin which was being used by soldiers to practice for the funeral of a young recruit who had died in a shooting at the controversial Deepcut barracks, a coroner heard today.

Pte Sean Benton was found dead with five bullet wounds to his chest on June 9, 1995. The 20-year-old was the first of four recruits to die at the Surrey barracks in seven years, a new inquest into his death has heard.

Former fellow recruit and close friend Neil Williams was initially refused permission by officers to attend the funeral but was finally allowed when Pte Benton's mother, Linda, requested him was a pallbearer.

Mr Williams also told how he was asked to take part in the clear-up at the site of Pte Benton's shooting.
read more here
Posted by Kathie Costos at 4:20 PM