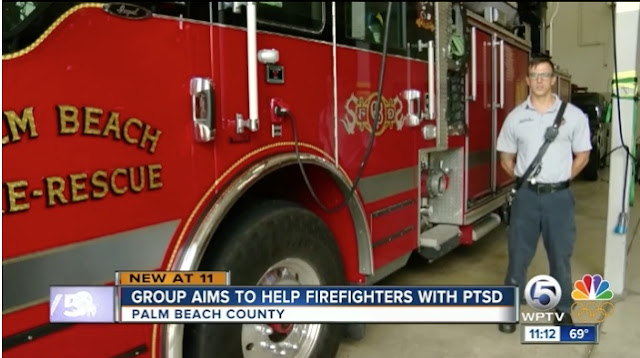 PALM BEACH COUNTY, Fla. - More firefighters committed suicide in the U.S. than died in the line of duty in 2015 and 2016, according to the Firefighter Behavioral Health Alliance. That group’s founder is part of a movement to try to change those statistics.
“Saying that we’re supposed to be strong and brave and handle it ourselves, it’s impossible to do," said Jeff Dill, founder and CEO of FBHA.

Palm Beach Fire Rescue firefighters along with members of other departments around the area sat in on training sessions with Dill.

Years of research has gone into the course he around the country, but Indian River County Battalion Chief David Dangerfield is the reason he came to South Florida to talk about it. Dangerfield suffered from PTSD and committed suicide in October 2016. Dangerfield’s wife, Leslie, set up the training.

read more here
Posted by Kathie Costos at 8:22 AM