Get Suicide Out of Your Head, Put Healing In
Combat PTSD Wounded Times
Kathie Costos
January 28, 2018 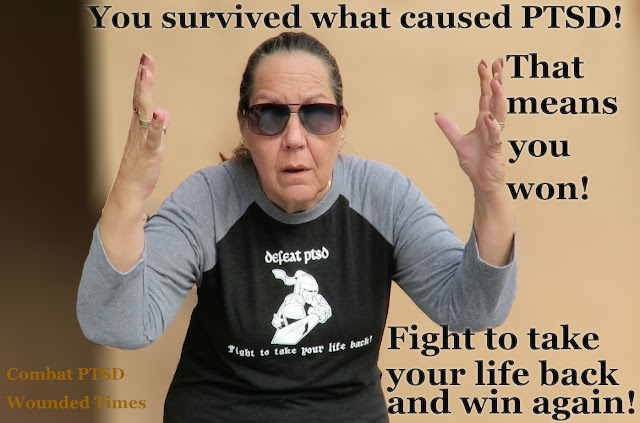 There seems to be a lot of confusion about something that should not confuse anyone after all these years. Human beings are not helpless because others are there to help them.

Those others, you, pay a deeper price than anyone else. For you, it is a matter of facing life or death situations over and over again because you chose it as your job to do.

When you are one of those rare ones putting the lives of others ahead of your own, that is what a hero does. Sure, you may get uncomfortable with that word and think of others you served with as more worthy of that title, but to the rest of us, that is exactly what you are.

There is a price you pay for what is inside of you. The same courage that made you want to do that job in the first place, is waiting for you to have the courage to ask for help. In other words, it may be time to call for backup!

If you see yourself as a victim, then you may be not even thinking of that in the right way. Do you feel the "victims" you risked your life for were worthy of the effort? After all, you managed to be there so they went from "victim" to survivor. Didn't you?

If what caused the PTSD did not win when it happened, then why let it defeat you now? You are a survivor of what happened yesterday and it became part of you but did not change you. It changed the way you think about yourself and others. It did not change "who you are" even though it changed "how you are" but you are in control of what you make out of what it is trying to do.

Someone told you a lie that may have made sense but if they told you PTSD is based on weakness, not being tough enough to take it, then they don't know what they are talking about. It is because you have a much stronger emotional core than they do. Maybe they are just jealous of that quality you have, then again, maybe they are only covering up their own pain because someone else told them that same lie.

Look up most of the Medal of Honor recipients who openly talked about what their actions did to them and how they battled PTSD as hard as they fought to save lives on the line.

When you walk away from "IT" you do not just carry your own pain. You carry the pain of others. Often they are not even people you know. Most of the time they are the one too many strangers you saw suffering, that piled onto all the others you encountered.

So please, ask yourself a very important question. "If life mattered so much to you, you risked your own for their sake, then why doesn't your life matter to you?" Are you willing to turn to the very people you know would have died for you and trust them?

You only have PTSD because you survived "IT" so stop thinking it defeated you. Stop being your own worst enemy and start being a hero in your own story. After all, if you think you are the only one you were with suffering, all you need to do is take an honest look at them and see the pain in their eyes. You know, the same pain you see when you look in the mirror.

What are you waiting for? This time the life you save needs to be your own!


UPDATE: This article either proves I read way too many articles on PTSD or, I must be getting through to some...

"Spreading the message that the heroes saving lives everyday, sometimes need help themselves. 'It reminds you that you are out there doing good. We didn’t do anything to cause any of those tragedies to occur, but we did the best we could.'"

Posted by Kathie Costos at 6:08 PM