An appointee of President Donald Trump has resigned from the federal agency that runs AmeriCorps and other service programs after remarks he made disparaging blacks, Muslims, gays, women, veterans with PTSD and undocumented immigrants surfaced in the news media.
Carl Higbie lasted less than six months as the chief of external affairs in the Corporation for National and Community Service. 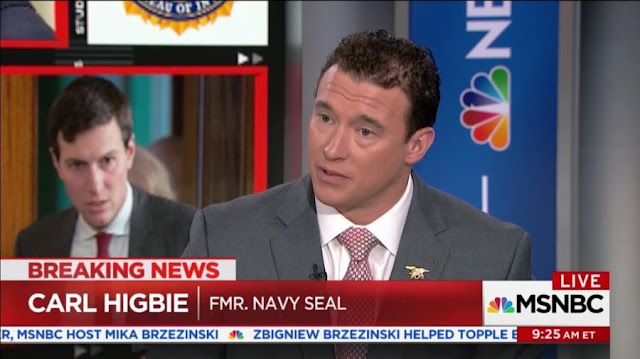 In other audio unearthed by CNN, Higbie, a former Navy SEAL, derided military veterans with PTSD as having "a weak mind," and said he thought a large majority of people with PTSD were being dishonest.

"I'd say 75 percent of people with PTSD don't actually have it, and they're either milking something for a little extra money in disability or they're just, they honestly are just lying," he said on another talk radio show in 2014.

Nonetheless, he was appointed to the position at the CNCS, which runs AmeriCorps and other volunteering initiatives, and has programs dedicated to rebuilding after natural disasters and supporting veterans and their families, including helping them transition once they return home. read more here and check back later on this


From CNN  aside from the other sickening things he had to say, which are too many to list here, this is more of the above report from CNN, with audio, if you can stand to hear the words out of his mouth. Reading them were bad enough, but listening to him was even worse.

"Yeah I'm a gonna go out on limb here and say, a lot of people are going to disagree with this comment," Higbie said on Sound of Freedom in February 2013. "But severe PTSD, where guys are bugging out and doing violent acts, is a trait of a weak mind. Now things like (military member) Brandon, where he was legitimately blown up and a loud noise makes him on edge -- completely understandable, but when someone performs an act of violence that is a, it is a weak mind. That is a crazy person, and the fact that they're trying to hide it behind PTSD makes me want to vomit.""I'd say 75% of people with PTSD don't actually have it, and they're either milking something for a little extra money in disability or they're just, they honestly are just lying," Higbie said in August 2014, as a guest on an Internet radio show. "Twenty-five percent legitimately do have problems. They have bad dreams. They can't cope. They have problems with noises and things like that. And I really think there are people that cannot deal with the stress of combat and some people can."

Donald Trump is drawing criticism after he appeared to suggest that veterans who suffer from PTSD might not be as strong as those who don't. Trump made the reference while discussing his desire to improve mental health services for veterans. (Oct. 3)


VA Conducts Nation’s Largest Analysis of Veteran Suicide July 7, 2016, 09:56:00 AM WASHINGTON — The Department of Veterans Affairs (VA) has undertaken the most comprehensive analysis of Veteran suicide rates in the U.S., examining over 55 million Veteran records from 1979 to 2014 from every state in the nation. The effort extends VA’s knowledge from the previous report issued from 2012, which examined three million Veteran records from 20 states were available. Based on the 2012 data, VA estimated the number of Veteran deaths by suicide averaged 22 per day. The current analysis indicates that in 2014, an average of 20 Veterans a day died from suicide.

But then again,  there were others, like Gen. Raymond Odierno

Considering there are Medal of Honor Heroes, other Generals, Navy SEAL, Green Berets, Special Forces from all generations, saying they have PTSD...doubtful any of these men would be willing to look one of them in the eye and tell them they were not tough enough to take it!
Posted by Kathie Costos at 6:08 AM