This started out to be a post about all the "awareness" being raised across the country. Stunning when you can see all of it just from the beginning of the year. What made this even more stunning was this "research" from University of Connecticut.

"In the survey, the average age of veterans was 35, and they had served in Iran, Afghanistan, and surrounding areas as part of Operations Enduring Freedom, Iraqi Freedom, and New Dawn. Most of them—62 percent—served in the Army. Seventy-five percent reported exposure to combat."

Yes, you read "Iran" instead of Iraq.  Yes, you read they were only talking about this generation of War on Terror veterans.


"Younger veterans in their 20s, both male and female, reported much less suicide ideation than older vets in their 40s and 50s who completed the survey. Park suspects the finding may be due to the fact that many older veterans of recent conflicts were members of the National Guard or military reserves who were called into service."

Yes, you just read they think younger veterans are not thinking about suicide as much as older veterans.

This is the part that got me...

Researchers found that veterans who had negative attitudes about religion and spirituality—meaning they felt God was punishing them or that God had abandoned them—were at significantly higher risk for suicide, even after accounting for depression and other variables.

Interestingly, the researchers found that positive feelings about religion and spirituality—feelings that God is a partner in your life and someone you can turn to for guidance, support and strength—did not significantly reduce veterans’ suicide risk.

"Most importantly, Park says, the study clearly showed that spiritual struggle among veterans is a separate and independent risk factor for suicide and not just a reflection of people’s depression."

“This suggests that people are experiencing some profound spiritual struggle over and above any depression they might have,” says Park. “What people experience, what they do, and what they witness can have profound negative effects on them when they come back.”

So which is it?

Top that off with their other finding that, 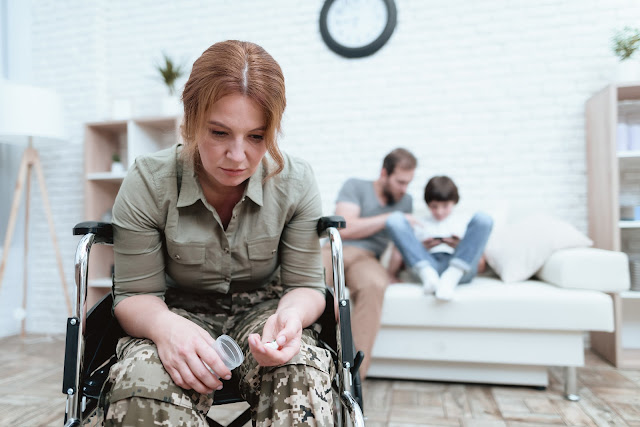 "Among recently returned veterans, a new study says those who are married or living with a partner are at higher suicide risk than soldiers who are single, and older married female veterans are at the greatest risk."

read more here when you're done shaking your head...I need a drink!
Posted by Kathie Costos at 4:23 PM