For as long as humans have walked this earth, there has been a risk that they would experience a traumatic event. For some, traumatic events create psychological effects that will last for months after the initial event. 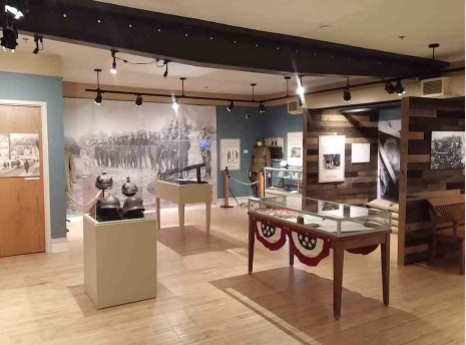 Photo courtesy of TCHM
The "Courage Without Fear" exhibit is now on display at the Tri-Cities Historical Museum, 200 Washington Ave. in downtown Grand Haven.


Today, this is commonly referred to as post-traumatic stress disorder (PTSD). According to the American Psychiatric Association, about 3.5 percent of adults in the U.S. will experience PTSD in a given year and 9 percent of people will develop it at some point in their life.

For those who have served in the armed forces, that number is even higher. The Department of Veterans Affairs estimates that 10-18 percent of veterans who have served in Iraq or Afghanistan are likely to develop PTSD after coming home. For some, PTSD can lead to substance abuse or other issues. The good news is that veterans are now seeking care more than ever.

Earlier this month, the Tri-Cities Historical Museum opened a new exhibit titled “Courage Without Fear: The Red Arrow Division in World War I.” This new exhibit uses first-hand accounts to tell the stories of local soldiers who braved muddy trenches, attacks on machine gun nests and hours-long artillery barrages during the war. Men from the Tri-Cities saw combat in some of the most intense battles of late World War I, including the famous Meuse-Argonne offensive that sealed victory for the Allies.


In 1915, the British Army Council gave in to the doctors and public sentiment and officially declared shell shock as a wound.

Early on in the war, British doctors tried a variety of treatments, including hypnosis, in an attempt to keep as many soldiers on the front lines as possible. As the war dragged on, the British Army continued to change procedures for how doctors could diagnose and treat shell shock. By 1917, soldiers were treated by being assigned to a rearward trench where they could get a break from battle, sleep and eat in relative comfort. After a short break, they would return to the front. A full evacuation of a shell-shocked soldier was only considered if no improvement was seen after several weeks of treatment. This style of treatment was used until the end of the war in 1918 and was seen as effective by the medical community and the army alike.

Unfortunately, following World War I, there was a collective silence in regards to shell shock. Many of the survivors feared a rekindling of their symptoms if they discussed their war experiences. In the medical community, hardly anything was published on the causes of shell shock or ways to improve treatment. It wasn’t until decades later, in 1952, that “gross stress reaction” was added to the Diagnostic and Statistical Manual of Mental Disorders. In the 1970s, PTSD became the commonly accepted term.
read more here

Posted by Kathie Costos at 8:21 AM