WINCHESTER, Tenn. — No one would dispute that paying tribute to a deceased 50-year-old Winchester military veteran is a particularly sad event. 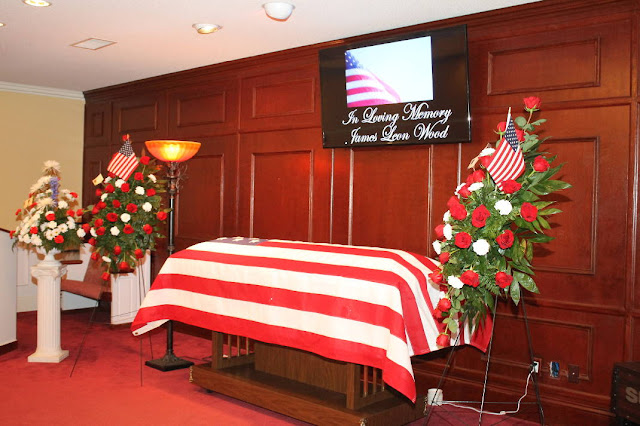 The body of U.S. Army National Guard veteran James Wood lies under the American flag Friday at his funeral service, where more than 300 people showed up after Wood's mother sent out a plea for people to attend because she was unable to do so.

About 300 people attended the funeral for James Leon Wood on Friday at Winchester's Watson-North Funeral Home.

Most of those attending the service were military veterans from Franklin County and other counties in Middle and Southeast Tennessee, even a busload of Vietnam veterans from Chattanooga. Some of Wood's friends also attended his service.

Many of those who attended Friday's services were answering a call last week from Wood's mother, Bertha Allen, who lives in New Mexico and was unable to attend her son's funeral. Wood was the victim of a homicide committed some time over the last several months, and six people, including his wife and her two adult children, have now been charged in his death.

His body was found in January buried under a concrete slab in the backyard of his own home.

David Michael, who lives in Tullahoma, described Wood as "a good friend and fishing buddy," just before the funeral service got underway.

Michael said he feels sad at the loss of his friend, but "we are celebrating his life, he was a gentle soul."
read more here
Posted by Kathie Costos at 4:16 PM