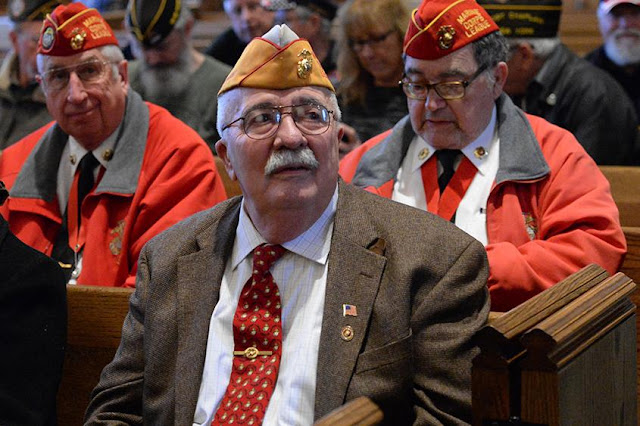 Longtime Marine Bob Becker of Schenectady listens at a ceremony in which he received the Four Chaplains Brotherhood Award. PHOTOGRAPHER: MARC SCHULTZ

Becker served in the U.S. Marine Corps as a supply chief and platoon sergeant in the Second Marine Division from 1960 until 1966. He then joined the USMC Reserve in 1966 and retired as a first sergeant in 1982. After his retirement, he advocated on behalf of veterans' rights. One of the more recent accomplishments Becker obtained through his advocacy was helping pass the bill in New York state allowing medical marijuana for treatment of those with post-traumatic stress disorder.

SCHENECTADY — After hearing several veterans, elected officials and church members talk about Bob Becker on Sunday, it was Becker’s turn to talk.

Becker, who had just received the Four Chaplains Brotherhood Award, barely spoke about himself. Instead, much like the meaning behind the award he was given on Sunday, he chose to focus on everyone else who got him to that point.

“This award is not for me,” Becker said. “It’s for the committee I work on.”

Becker, of Schenectady, was given the award by the Jewish War Veterans of the United States Albany Post 105 at the First Reformed Church on Sunday.

The award was created in the name of the Four Chaplains. The chaplains were among those who died in February of 1943 on the S.S. Dorchester when the ship was struck by a German torpedo during World War II in the North Atlantic.

The four man group was made up of a Methodist minister, a rabbi, a Catholic priest and a Dutch Reformed minister. They are heralded for putting the rest of those on the boat before themselves, as they helped the other soldiers board lifeboats and gave up their own life jackets when the supply ran out. They then linked arms, prayed and sang hymns as the boat sank into the sea.
read more here
Posted by Kathie Costos at 4:10 PM