CHURCHILL (KDKA) — A man is in the hospital following a lengthy standoff and officer-involved shooting in Churchill Wednesday evening.

The incident began around 4:15 p.m. at a home in the 2200 block of Harmain Road.
The sound of gunfire was in the air as SWAT officers tried to get the 50-year-old man inside of the home to surrender.“He is a Navy SEAL war veteran. They said he had high-powered weapons in his home,: said neighbor Tami Warfield. read more here

CHURCHILL (KDKA) — Police and the SWAT team have surrounded the home of an Army veteran in Churchill. 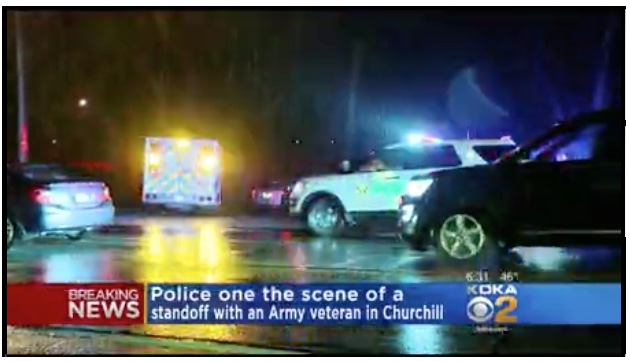 Officials were reportedly called to the scene by neighbors who claim the man was fighting with his wife. He then refused to come out of the home.

There are numerous police agencies on the scene.

PennDOT was forced to shut down the Parkway East in both directions near the Greensburg Pike exit as a result of the standoff. The highway was closed from Wilkinsburg to Churchill, but has since reopened.

Traffic was expected to be backed up for a while as a result.
Stay with KDKA for the latest on this developing story.
Posted by Kathie Costos at 8:25 PM