Last night, the trigger was pulled at Pathway House. Three women, who dedicated their lives to help veterans recover from PTSD, were dead. A veteran, who dedicated part of his life to the Army, is dead and will be remembered as a murderer.

Afghanistan veteran Albert Wong, will not be remembered for his service. He will not be remembered for seeking help for PTSD. No one will remember that he had not just been trained to use weapons, he was also trained, in what he was told, would make him "resilient" against what combat could do to him. How do I know? Because every member of the military has been told the same thing.

May 29, 2009 post was titled "Comprehensive Soldier Fitness will make it worse" along with this predication,

"If you promote this program the way Battlemind was promoted, count on the numbers of suicides and attempted suicides to go up instead of down. It's just one more deadly mistake after another and just as dangerous as sending them into Iraq without the armor needed to protect them."

In this case, as with most of the deadly outcomes, I'm sick to my stomach knowing I was right. All the people in charge of this clusterfuck have been wrong all along.

By 2012 I knew I had to figure out why this was still going on. Why was it still being funded? Why was it being pushed on every member of the military? 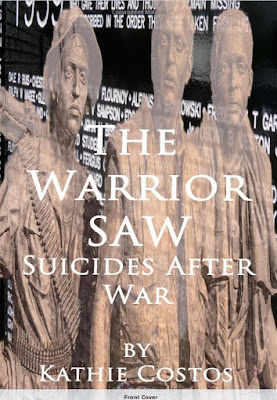 I tracked down reports on who was benefitting from it and laid it all out in The Warrior SAW, Suicides After War and the money was in the billions.

This so-called "resilience" training was not a proven program before the military bought it. It was a research project created to try to figure out how to give school aged children a better sense of self-worth. Yes, you read that right!

By 2013 RAND Corp, along with a lot of others, figured out that it was not working and offered warnings of their own.

In 2014 NBC News reported this


Military Uses Unproven Mental Health Programs, Report FindsNBC NewsBY MAGGIE FOX
Veterans of the Iraq and Afghan wars, as well as other service members and their families, have high rates of depression, anxiety and other disorders, yet the U.S. military isn’t using tested screening methods to help prevent them, a team of experts said Thursday.

And despite extensive research, the panel of experts couldn’t find any proven Department of Defense programs to prevent domestic abuse. Programs to battle sexual assault — another documented problem — aren’t being assessed to see if they actually work, the Institute of Medicine panel reported.

“A fundamental finding of the committee is that, with some notable exceptions, few of DOD’s prevention interventions are theory- or evidence-based,” wrote Kenneth E. Warner, a public health expert at the University of Michigan who headed the panel.

One obvious example of an unproven and controversial approach is the Comprehensive Soldier and Family Fitness program, which includes a mandatory online training program developed with the American Psychological Association, the report finds.


Last night, I was trying to get updates on the Pathway House shooting, but the 24-7 national news stations were too busy on political topics. It seems they have also been too busy reporting on politicians than doing any investigations into the outcomes of what they do.

Three women are dead, a veteran survived risking his life in Afghanistan, but ended up committing suicide after killing the women who tried to help him.

Is anyone being held accountable for any of this?

Posted by Kathie Costos at 8:21 AM