HONOLULU — Seventy-three years ago on the island of Iwo Jima, Hershel “Woody” Williams randomly chose several fellow Marines to give him rifle cover as he made a one-man charge with his flamethrower against a network of Japanese pillboxes. 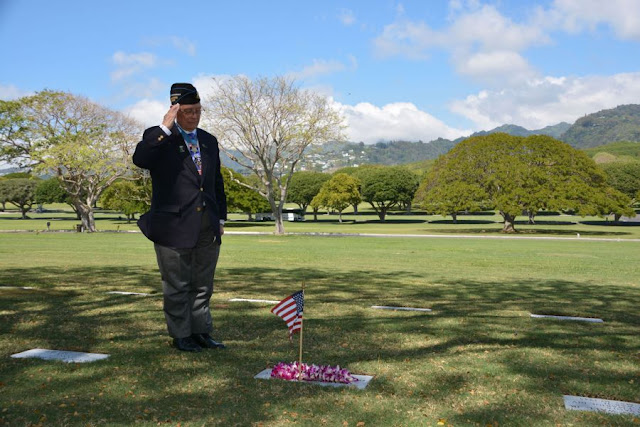 Hershel “Woody” Williams salutes before the grave of Charles G. Fischer on March 17, 2018. Fischer was a Marine Corps rifleman who died in Iwo Jima while providing covering fire for Williams. Williams learned of Fischer’s identity and gravesite location only several months ago.

He spent four hours unleashing flames into the pillboxes that had stymied advance for days, racing back to the Marine Corps lines to refuel the flamethrower, and then running again into battle — all while covered by only four riflemen.

Williams was ultimately awarded the Medal of Honor on Feb. 23, 1945, for “conspicuous gallantry and intrepidity at the risk of his life above and beyond the call of duty,” as the official citation describes it. He “daringly went forward alone to attempt the reduction of devastating machinegun fire” coming out of reinforced concrete pillboxes, on which bazooka and mortar rounds had no effect.


Two of the Marines covering Williams died that day, but he never knew their names, and never knew where their remains rested until just a few months ago.

On Saturday, Williams, with the Medal of Honor hanging around his neck, stood over the Hawaii grave of Charles Fischer, one of those “guardian angels” who helped him survive that day and is buried in the National Memorial Cemetery of the Pacific, nicknamed the Punchbowl.
read more here

Posted by Kathie Costos at 5:11 PM