PTSD Patrol: Win the battle side by side

"What is behind you, is not as strong as who is beside you."
PTSD Patrol
Kathie Costos
March 18, 2018

"The love of God and his fear grew in me more and more, as did the faith, and my soul was rosed, so that, in a single day, I have said as many as a hundred prayers and in the night, nearly the same. I prayed in the woods and on the mountain, even before dawn. I felt no hurt from the snow or ice or rain."

Patrick's captivity lasted until he was twenty, when he escaped after having a dream from God in which he was told to leave Ireland by going to the coast. There he found some sailors who took him back to Britain and was reunited with his family. (from Catholic.org)

Many do not understand that the day they say everyone becomes Irish, is a celebration of a victory. Patrick defeated doubt. He escaped his captors and went on to greatness.

You defeated the thing that sent PTSD into you. Why let it win now? 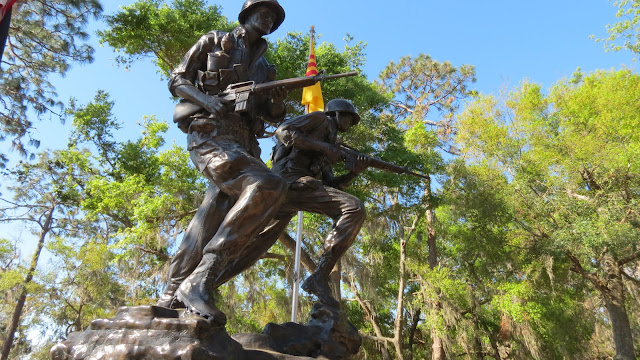 I love this memorial because it shows two soldier side-by-side, walking forward, ready to face the enemy.
read more here
Posted by Kathie Costos at 7:46 AM