Vets seek a path out of the darkness on The Sacramento Bee, Editor’s note: This column was originally published on Feb. 24, 2013 and it is by Foon Rhee, Associated Editor.


"There were a record 349 suicides last year in the active-duty military, many more than were killed fighting in Afghanistan. But the specter of suicide doesn’t end once service members come home. It gets worse."

This is from the DOD Suicide Report 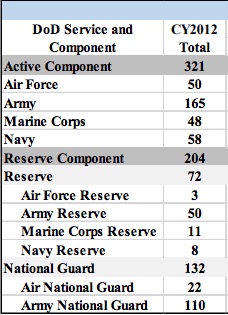 That equals 525.
Maybe he needed to add to the reports of what happened at Pathway House? Maybe he should have done some checking first, before reposting it.

That is the part that gets to me the most. When you have something as serious as veterans committing suicide and struggling to heal, it should never be something easy to report on.
Posted by Kathie Costos at 4:56 PM