The VA acknowledges that there's very little proof that tai chi — or other alternative treatments like mindfulness and acupuncture — will do any good for PTSD or addiction, though there has been research into the benefits of tai chi related to quality of life among the elderly. Still, Aaron Grobengieser, who oversees alternative medicine in Murfreesboro, says the VA will attempt to track the effectiveness by the numbers. 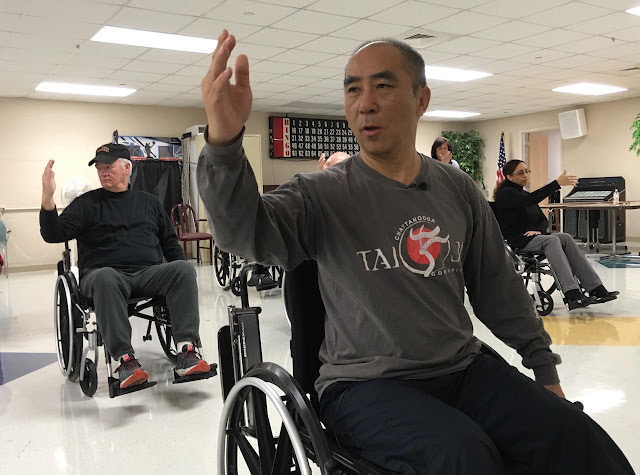 The U.S. Department of Veterans Affairs has been desperate to cut down on the use of powerful pills. So the mammoth agency has taken a sharp turn toward alternative medicine. The thinking goes that even if it doesn’t cure a mental or physical ill, it can't hurt.

In Tennessee, treatment for veterans is beginning to include the ancient martial art of tai chi. Zibin Guo leads a weekly session at the Alvin C. York VA hospital in Murfreesboro. He guides vets through slow-motion poses as a Bluetooth speaker blares a classic tai chi soundtrack.

Someone needs to tell the VA the proof is in how they feel and if they look forward to doing it!!! They do!
Posted by Kathie Costos at 2:33 PM