Fire officials are sounding the alarm about PTSD,

Fire officials are sounding the alarm about PTSD, suicide trends. 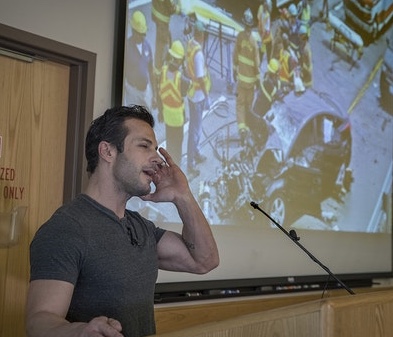 ELIZABETH FLORES – STAR TRIBUNE
Gallery: Brian Cristofono spoke with firefighters from the Brooklyn Center Fire Department after he gave a presentation on his PTSD, Monday, March 26, 2018 in Plymouth, MN. Traumas from being a firefighter, the one he dreamed of as a kid, led to a severe PTSD diagnosis, costing him both his marriage and his work. In his 13 years on the job, three colleagues killed themselves. Twice he put a gun to his own head. Now, Cristofono is sharing his story about the plight firefighters face and the lack of job coverage for those who suffer from PTSD in Minnesota. Nationwide, firefighters are more likely to take their own lives than die in the line of duty. Like other first responders, they're more than twice as likely to commit suicide than the general population. In Minnesota, momentum is slowly building to address these troubling trends, with Cristofono as a leading voice.


Even now, nearly two years after the last calls for help came in, ghosts from his days as a firefighter and paramedic are tough to shake. Babies he couldn’t save. Parents he struggled to comfort. Crash victims beyond reviving.

“They leave scars,” said Cristofono, 42. “The job can really just be a dark look at life.”

Traumas from his job — the one he dreamed of getting as a kid — led to a severe post-traumatic stress disorder (PTSD) diagnosis, costing him his marriage and causing him to retire from the St. Paul fire department in 2017. During his 13 years on the job with various departments, three colleagues killed themselves. Twice, Cristofono put a gun to his own head.

Posted by Kathie Costos at 4:49 PM