VA Clinics not always what you think they are

First question should be, is this a VA run clinic or is it a contractor run clinic? You know, like maybe something like this...

VA officials say the possible expiration of a contract with a medical clinic in Ely would not cause a hardship for veterans there, but two members of Nevada’s congressional delegation want to be sure.
U.S. Sen. Dean Heller, R-Nev., and Rep. Ruben Kihuen, D-Nev., both expressed concerns last week that the possible decision by the Veterans Affairs Salt Lake City Health Care System not to renew the contract with the William Bee Ririe Hospital and Rural Health Clinic in Ely could adversely impact the 230 veterans who receive care there.


Christopher Wilson said he was in the room for an appointment on April 5 to get 18 injections in his ankle and surrounding area, and worried about the appearance of the room, which he said "felt unsanitary." The ankle was being treated in relation to a service injury he suffered while serving in Iraq, according to his father. 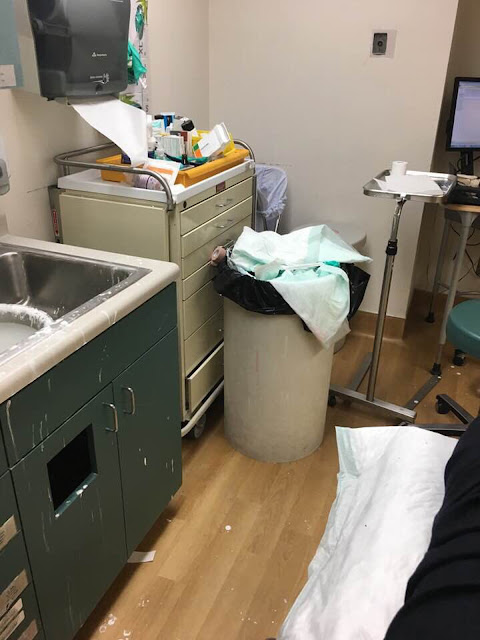 Pictured is a patient room at the George E. Wahlen Department of Veterans Affairs Medical Center in Salt Lake City that Army veteran Christopher Wilson says he encountered during a visit on April 5, 2018.

SALT LAKE CITY — After the father of a U.S. Army veteran tweeted photos of an unkempt patient room at a Veterans Affairs clinic in Salt Lake, igniting angry reactions on social media, a top administrator there said the facility is investigating why the space was in poor condition.

The tweeted photos showed some medical supplies strewn out on a counter, a bowl containing water and a plaster-like substance sitting mostly full in a sink, and an overflowing garbage can.

"I figured they would say, 'Oh, this room's not clean' and take me somewhere else, but they just kind of blew past it, didn't acknowledge it," said Christopher Wilson, who spent six years in the Army and was deployed to Iraq twice. "They're doctors, right? So I figure one of them was going to say 'Let's go somewhere else' or 'Give us a minute to clean it,' but nothing."
read more here
Posted by Kathie Costos at 8:18 AM