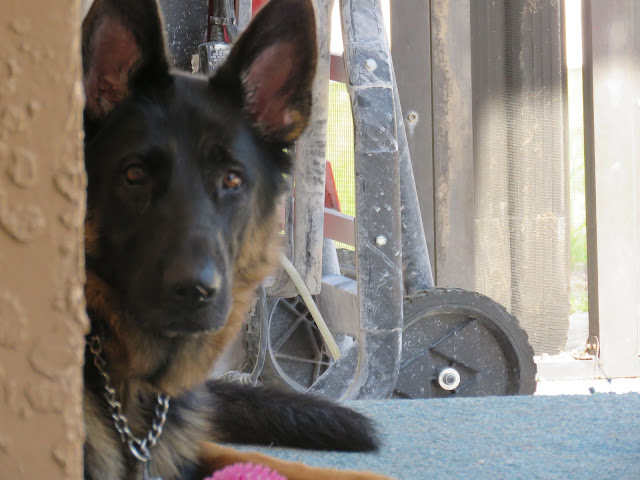 As much as I love taking him places with us, I need to understand that there are others afraid of him. After all, his head is up to my hip. Yep, a big boy! That thing behind him is a tile cutter, so you can judge his size.

Ok, that said, this is from the ADA

Q5. Does the ADA require service animals to be professionally trained?
A. No. People with disabilities have the right to train the dog themselves and are not required to use a professional service dog training program.
Q6. Are service-animals-in-training considered service animals under the ADA?
A. No. Under the ADA, the dog must already be trained before it can be taken into public places. However, some State or local laws cover animals that are still in training.
The law is not very clear and there needs to be a lot more members of Congress-State and Federal-to get this right, make it clear and make sure there are penalties for people just wanting to "fake service dog" giving real ones a bad reputation. Want to lose your rights? That is the surest way it will happen.

This is your right and your obligation.

Ohio veteran cited for bringing his service dog to VA hospital
By: NBC4 Staff
Updated: May 20, 2018

CINCINNATI (WCMH) - A military veteran in Ohio has a service dog to help him deal with his PTSD, but the vet got in legal trouble when he brought the dog with him to a VA hospital.

"The dog is a medical necessity. I'm covered by the ADA," he said.

Rimmer was a K-9 handler in the Air Force. He served two combat tours in explosive detection.

"You can't adjust back to civilian life. You can't explain it unless you've experienced it."

When Rimmer was admitted to the Cincinnati VA hospital for tests Wednesday, Old Glory went with him.

But, that resulted in the VA Police issuing a citation to federal court.

Cincinnati VA police chief David Bartos told WCPO he believes the dog is a puppy, not a service animal trained to perform tasks for the disabled.

That's where things get confusing. ADA guidelines say a service animal can be used to calm people with PTSD.

Posted by Kathie Costos at 2:41 PM