What kind of a message does this send? Increase funds for private care but close down VA Clinics that treat disabled veterans?

Fearing that the Brooklyn VA Hospital could ultimately be in jeopardy, supporters of the facility — which treats veterans from across the borough as well as Staten Island — are staking their position in support of the hospital, which recently decided to shutter its ENT clinic. 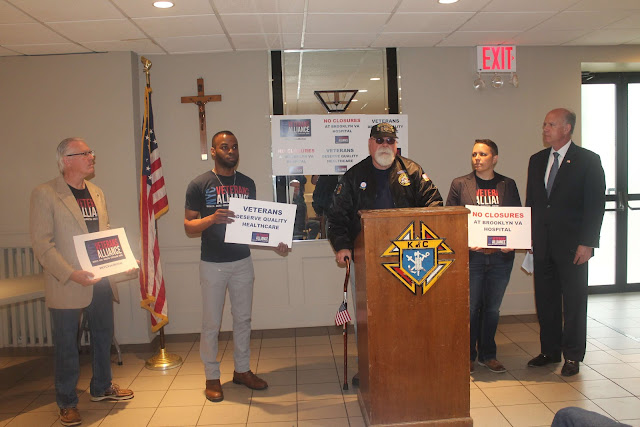 On Friday, June 1, veterans, Congressmember Dan Donovan and the New York City Veterans Alliance joined together at a conference at the Knights of Columbus, 1305 86th Street, to protest the closure and express their concern that the hospital so many former members of the military rely upon will eventually downsize to an outpatient only clinic or transform into condos.

“It’s already hard for some of our local veterans to get to the Brooklyn facility and now many will have to travel to the Manhattan facility or one in the Bronx,” said Donovan. “This could be particularly devastating to those who are elderly or disabled, who may forgo visits instead of facing long and difficult commutes to get to their appointments. The decision needs to be reversed.”

“We’ve been seeing a gradual decline in services,” said Danny Friedman, president of Vietnam Veterans of America Chapter 72. One of the worries is that the facility will be the victim of a gradual diminution of services, effectively death by a thousand cuts. In 2015, the U.S. Veterans Administration decided to close a 25-bed inpatient medical surgery unit at the hospital, another move that was vocally protested by veterans and their supporters.
read more here
Posted by Kathie Costos at 8:34 AM