Veteran who lost both arms in Iraq discovers a talent for painting
CBS NEWS
By DAVID MARTIN
July 3, 2018

"I don't see it that way. Suffering an injury like this sort of has a way of making you focus on what's important in life." Peter Damon 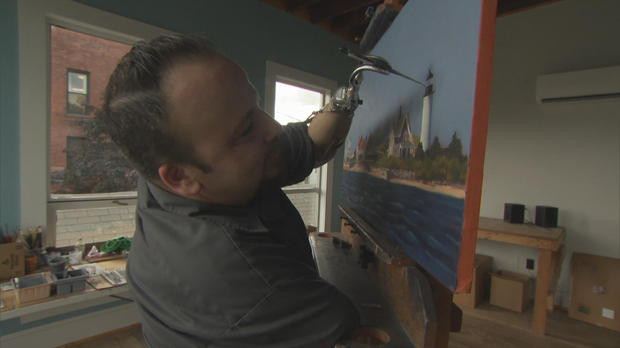 Peter Damon at work on a painting CBS NEWS


MIDDLEBORO Mass. -- Peter Damon turns out about 30 paintings a year and sells them for between $250 and $1,500. That's not enough to make ends meet, but it has made him whole again. He lost both arms in Iraq.

"Having this skill or pursuing this skill that even able-bodied people find difficult was something that really sort of gave me a boost and sort of made me feel like I fit in more in the world," Damon said.

He was an Army helicopter mechanic working on landing gear in 2003 when pressurized gas blew it apart, killing one soldier and gravely injuring him. "I lost my right arm above the elbow, about three inches above the elbow, and my left about six inches below," he explained.

Damon was a blue-collar guy who had been an electrician before he joined the Army.

"How am I going to make a living and take care of my family? I had always worked with my hands," he said.

Then with a simple little drawing, a new future opened up for him.

"I was kind of miraculous in a way," Damon said. "Something was telling me to focus on this and everything will be alright."
read more here
Posted by Kathie Costos at 7:40 AM