The mural depicted a group of U.S. Marines in Desert Storm. The group is standing in a circle with a large American flag in the background watching a soldier break dance.


In Deep Ellum, murals are more than works of art, they're part of the community's story.

"This is our way of communicating, our way of expressing ourselves," said local artist Preston Pannek. 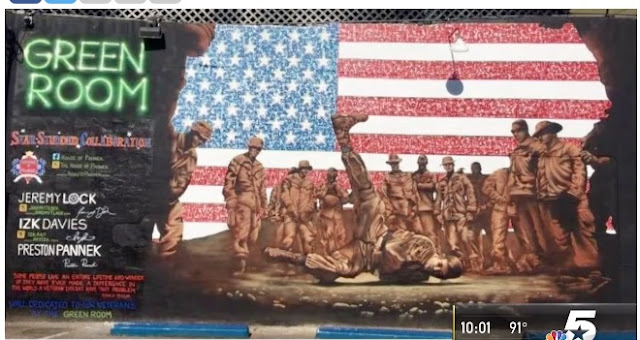 On Friday Pannek felt like a piece of that story was erased when the mural he worked tirelessly to paint on a wall outside the Green Room was covered up with black paint.

Neighborhood residents and artists are outraged.

The building is owned by Westdale. Pannek called Friday to find out why it was covered and said he spoke with a the property manager.
"Right off the bat he was extremely rude and said 'It's gone. There is nothing I can do about it,'" said Pannek.
read more here

Posted by Kathie Costos at 8:39 AM