For Generals healing troops is a labor of love

Here are two Generals who stepped up to make sure the men and women they commanded would get the one message they needed to hear! PTSD is not a sign of weakness!

General Carter Ham way back in 2008 started to share his story and kept on talking about it to save lives! 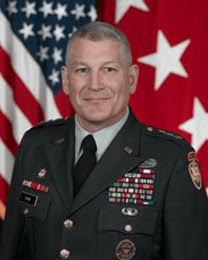 I was thankful for General Carter Ham and still am!


I am thankful for all of the men and women serving this country and those who served coming forward to talk about PTSD. All these years later after the first studies were done, there are now so many that soon no one will ever wonder again what PTSD is.

There are literally hundreds of their stories on this blog but the most magnificent thing about all of them is that they were willing to talk about it no matter how much others wanted to stigmatize them. Their courage is a testament of the human spirit.

When commanding officers are willing to say they have PTSD because of their service, it sets an example for all others to follow. Because of General Ham, his willingness to face this wound without any kind of shame will allow all others to come forward to seek the help they need to heal.

Thankful story two belongs to General Carter Ham. As you read his story think of all the others coming forward and know we all owe them a debt of gratitude.

In 2008, another General stepped up. Major Gen. David Blackledge  "I have dealt with it. I'm dealing with it now. We need to be able to talk about it."

Special Forces, the toughest of the tough, were proving that PTSD is not a sign of weakness but not getting help was deadly. This came out in 2014.


Earlier this month, Socom commander Adm. William McRaven told a Tampa intelligence symposium that commandos are committing suicide at a record pace this year. Though he offered no figures, he was repeating a concern he first raised in February at a Congressional hearing on his budget.


“The last two years have been the highest rate of suicides we have had in the special operations community and this year I am afraid we are on the path to break that,” McRaven, whose headquarters is at MacDill Air Force Base, said at the GEOINT 2013* Symposium in Tampa earlier this month.

Medal of Honor heroes were talking about having to battle PTSD after proving their courage in combat.

So when, exactly, do the men and women in the military get the message all of these people have been sending them all these years?
Posted by Kathie Costos at 8:18 AM