After reading some of my Republican friends lash out on social media today, it made me sick to my stomach. Then again, they are letting the political haze cloud their judgment to the point where they miss the biggest point of all.

When I think of all the female veterans I have talked with over the last 30+ years, all I could think about was what they went through after being attacked by other service members who were supposed to be ready to die for them, but used that trust to attack them.

The press has ignored the worst part about Senator Graham's outburst yesterday. That is, the message he sent every member of the military about what he thinks about sexual assaults.

When he sat there and defended a man accused of sexual assaults, after listening to the woman tell what happened to her, he sent a shock wave throughout female veterans who have been subjected to this attitude for far too long.

Was he actually trying to say that sexual assaults were not crimes? Is that what he and many other Senators think?

What makes this worse is Graham was a Colonel in the Air Force.


Before being elected to Congress, Graham compiled a distinguished record in the United States Air Force as he logged six-and-a-half years of service on active duty as an Air Force lawyer. From 1984-1988, he was assigned overseas and served at Rhein-Main Air Force Base in Germany. Upon leaving active duty Air Force in 1989, Graham joined the South Carolina Air National Guard where he served until 1995. During the first Gulf War in the early 90's, Graham was called to active duty and served state-side at McEntire Air National Guard Base as Staff Judge Advocate where he prepared members for deployment to the Gulf region.

In 1995, Graham joined the U.S. Air Force Reserves. During American military operations in Iraq and Afghanistan, Graham put his experience in military law to use pulling numerous short-term Reserve duties in both countries over congressional breaks and holidays.

Graham retired from the Air Force Reserves in June 2015 having served his country in uniform for 33 years. He retired at the rank of Colonel. 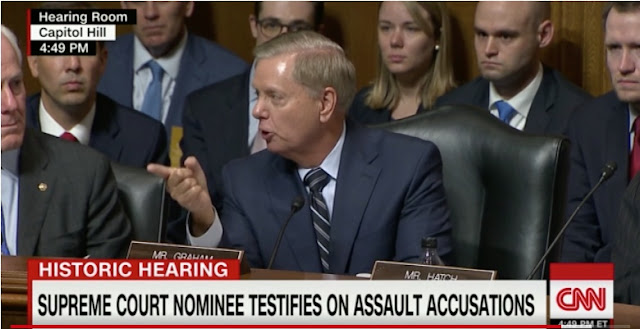 When you consider the committees he serves on, it is even worse.

This same senator serves on these committees

And if you have not been paying attention to how huge sexual assaults are in the military, far worse than what we civilians deal with, here is a little bit more you should know.

The DOD released this


WASHINGTON --The Defense Department today released its Annual Report on Sexual Assault in the Military, which shows that service member reporting of sexual assault increased by about 10 percent in fiscal year 2017.The increase in reporting occurred across all four military services.The report for fiscal 2017 says the department received 6,769 reports of sexual assault involving service members as either victims or subjects of criminal investigation, a 9.7 percent increase over the 6,172 reports made in fiscal 2016.The department encourages reporting of sexual assaults so that service members can be connected with restorative care and that perpetrators can be held appropriately responsible, Navy Rear Adm. Ann M. Burkhardt, the director of the Defense Department’s Sexual Assault Prevention and Response Office, told reporters."Every sexual assault in the military is a failure to protect the men and women who have entrusted us with their lives,” she said. "We will not rest until we eliminate this crime from our ranks."


VA Must Prove to Women Vets That They Belong

Last month, a Department of Veterans Affairs Inspector General report revealed that roughly 1,300 claims for military sexual trauma were incorrectly processed and denied, leaving veterans suffering from PTSD without the benefits they deserve.

Military Times had to produce this

Sexual assault risk at your military base: Here’s a searchable database

So yes, as Senator Graham talked about the hell that he saw the accuser and the accused go through, he just added to the hell survivors of sexual assaults have been in while he had the power in the military and when he sat on the committees that were supposed to make it right for them.

They just heard him loud and clear.
Posted by Kathie Costos at 5:55 PM