Camp Lejeune Marine couple get $20,000 after being on 'Ellen' 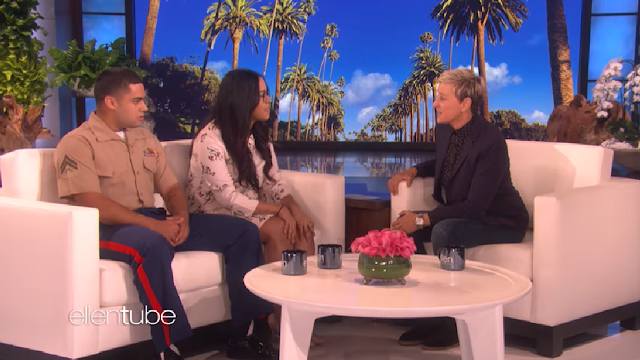 
LOS ANGELES — A reunion video that has netted over 17 million views on social media landed a Camp Lejeune Marine couple a special gift when they appeared on "Ellen" on Friday.

Cpl. Brandon Crespo and wife Francis shared a video of his return from a six-month deployment. In the video, Crespo got to meet his son, Noah, for the first time. Francis was pregnant during Crespo's sea deployment.

The video has racked up over 17 million views, which got the interest of Ellen DeGeneres. She invited the couple onto her show Friday to discuss the deployment and pregnancy process.

Crespo stayed on the phone during Noah's birth and said he "was filled with anxiety. I couldn't believe it was happening."

DeGeneres gave the couple $20,000 from Shutterfly so they can go on the honeymoon they were unable to have so far.
go here for video
Posted by Kathie Costos at 8:10 AM