From Firehouse to Homeless Veterans House in Santa Rosa


About 40 veterans have housing vouchers but cannot find a place to live due to Sonoma County’s shortage of affordable housing, officials said. “We need about a thousand of these,” Mayor Chris Coursey said at Friday’s open house. “Maybe not a thousand, but we need a lot of these.” 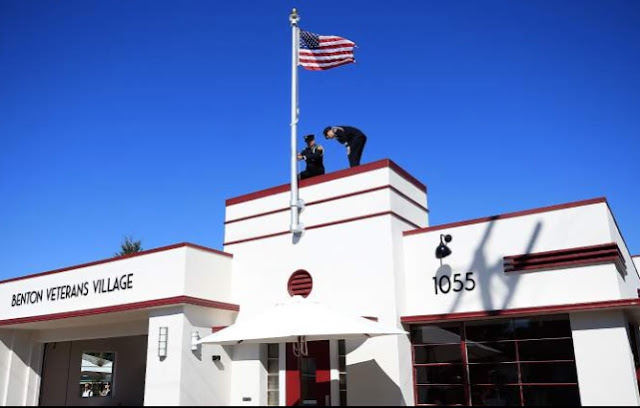 Kent Porter/Press Democrat
Traci Swank-Chrisco can’t wait to move in. Standing between the old Benton Street firehouse and a new apartment complex, she reminisced about being homeless twice in her life, including a stretch where she was raising her son. The Santa Rosa native and former Army private has a place with roommates now, but the second-floor apartment at the new Benton Veterans Village will be just for her when she moves in next week.

“It’s the first place that I’ve had since I got out of the Army that I don’t have to share with a lover, a child, or a roommate,” she said. “It’s monumental.”

The new homes for Swank- Chrisco and six other formerly homeless veterans are part of the $3.6 million Benton Veterans Village development, which came to be through a joint effort led by the nonprofit developer Community Housing Sonoma County. The new apartments were built adjacent to the repurposed Santa Rosa firehouse, which in recent years has served as a food pantry.

An open house was held Friday to celebrate the progress and the promise of the property.
read more here
Posted by Kathie Costos at 5:01 PM