Medal of Honor recipient saved lives, now has GoFundMe for his family

Former Army Staff Sgt. Ronald Shurer II, who received the Medal of Honor in 2018 for braving heavy gunfire to save lives in Afghanistan, has died of cancer. He was 41.

Miranda Shurer said her husband died Thursday in Sibley Memorial Hospital in Washington, D.C. She said he was diagnosed with cancer three years ago.
read it here on CBS News

Trump Awards Medal of Honor to His Own Secret Service Agent
Military.com
By Matthew Cox
1 Oct 2018


A decade later, Shurer is fighting another battle -- this time with stage 4 lung cancer. More than 500 people have joined his cause and are attempting to raise $100,000 for his family through a gofundme account.

President Donald Trump on Monday awarded the Medal of Honor to former Army Staff Sgt. Ronald Shurer II, a Secret Service agent who is now fighting a battle with cancer. 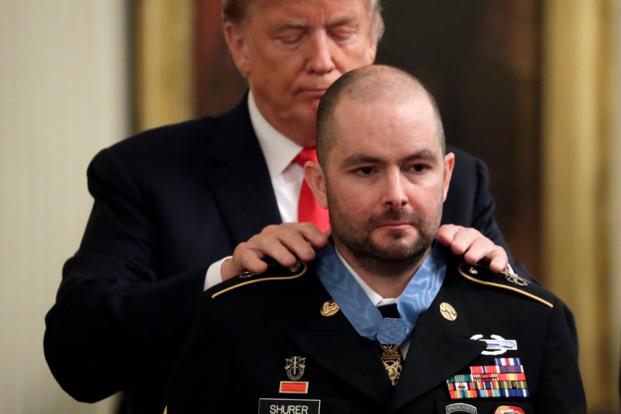 "Today is a truly proud and special day for those of us here in the White House because Ron works right here alongside of us on the Secret Service counter-assault team; these are incredible people," Trump told a crowded room filled with Shurer's family, fellow soldiers and Army senior leaders. The assault force encountered no enemy activity during the 1,000-foot climb to their objective, but as the lead element approached the target village, "roughly 200 well-trained and well-armed terrorists ambushed the American and Afghan forces," he said.


Shurer, the mission's only medic, immediately began treating wounded. He then sprinted and climbed through enemy fire to reach several of his teammates who were pinned down on a cliff above.
read more here

Posted by Kathie Costos at 8:08 PM