It is not OK for the VA to behave this way!

Veteran caregiver program cut by 80 percent this year in Tennessee


The cuts are happening at VA medical centers across the country at a time when the program is supposed to be growing. Congress approved a major expansion with the Mission Act in May. But the VA missed its deadline in October to implement new technology. 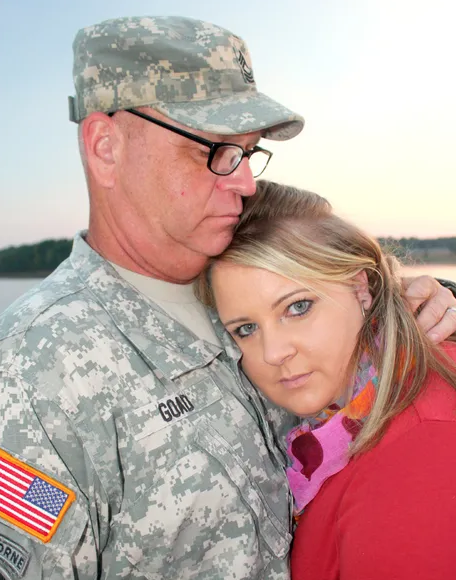 The VA cut Master Sergeant Timothy Goad and his wife, Sarah Goad, from its caregiver program this year, citing that she was doing her "spousal duty." (Photo: Goad Family)

Master Sgt. Timothy Goad was on patrol in Iraq in an armored vehicle when it was struck by an IED blast in 2005.

The incident left him with a traumatic brain injury, 60 percent hearing loss and a vision disorder that makes his eyes unable to align properly.

Then just two months later, while on another patrol — 27 hours in — the Humvee in front of him was blown up by another improvised explosive device.

When Goad ran up to help, he found one soldier with a hand nearly taken off and another with a gaping wound to the abdomen.

There was a giant hole where the door had been and nothing else.

Goad went back to base where he had to tell the soldier’s twin brother he had died.

"He has survivor's guilt," his wife Sarah Goad said in an interview with USA TODAY NETWORK - Tennessee. "This is something major that he's had to deal with, wondering why he's still here."
read more here

And yet, on the same day this was reported by Military.com


A VA Office of Inspector General investigation into the program uncovered poor management oversight that resulted in the Veterans Health Administration paying $4.8 million to caregivers of veterans who weren't eligible for the program.


The Department of Veterans Affairs on Friday announced it would temporarily stop discharging veterans from a program that provides compensation and benefits to family members who take care of them.

In a release announcing the suspension of discharges from the Comprehensive Assistance for Family Caregivers program, the VA said it was halting dismissals because of "continued concerns expressed by veterans, caregivers and advocates about inconsistent application of eligibility requirements by VA medical centers" of the program.
read more here

Veterans kept their promise when they served their time with their lives on the line. Why would the VA think it was OK to behave this way because the veteran ended up disabled in the process of serving their end of the deal?
Posted by Kathie Costos at 7:58 AM