After learning a U.S. Army veteran would be buried without family present, Rick Lee of Elizabethtown said he was going to be there. 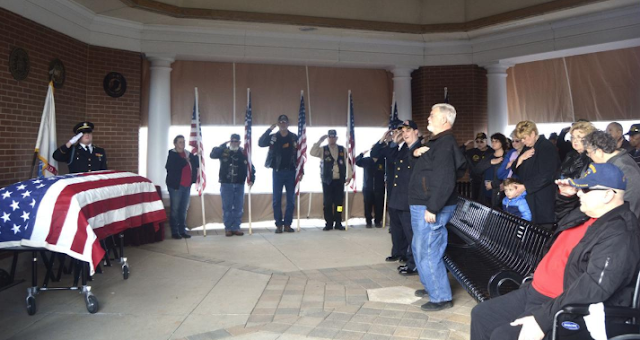 Dozens of people gathered Tuesday afternoon at Kentucky Veterans Cemetery-Central in Radcliff to honor a veteran who had no family listed.

“No veteran should ever have to be buried without somebody being there to represent them,” said Lee, who also is a member of American Legion Hardin Post 113.

Lee served in the military police and personnel administration for 30 years. He said he first joined the military after being raised around “coal mines and strip jobs” in Pennsylvania.

Many details on the veteran buried were not available as of Tuesday evening. According to an official from Spring Valley Funeral Home in New Albany, Indiana, the veteran was William Lucey, 61. Lucey was born Aug. 27, 1957, in Louisville. He joined the Army in 1974 and was honorably discharged about a year later. He died Dec. 2.
read more here
Posted by Kathie Costos at 5:07 PM