Investigators say the 36-year-old Robert Henry finished his TSA shift earlier this month. Henry, who had worked for the TSA for more than 12 years, then made his way to an upper level of the Hyatt Regency hotel, which has indoor balconies overlooking the large atrium that encloses the airport's security checkpoint.

Co-workers and friends of the TSA agent learned of his death during a meeting where they were getting information about resources available if there is another shutdown this month. TSA union representatives said crisis counseling is available to people in an effort to try to help them deal with everything going on.


Travelers with flights at gates 70-129 will be re-screened, delays possible By Anna Johnson - Digital Journalist 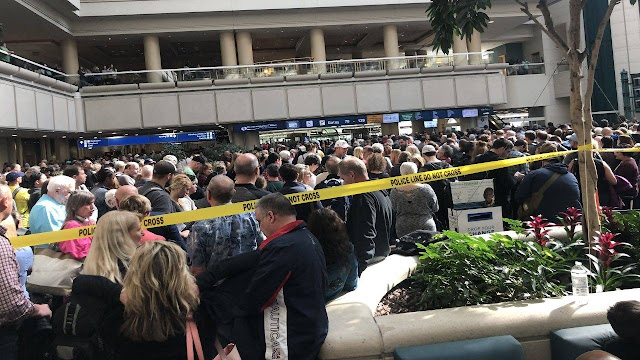 ORLANDO, Fla. - A Transportation Security Administration agent is dead after he jumped from a balcony in the Hyatt Regency Hotel at the Orlando International Airport, according to officials from the Orlando Police Department.

In a tweet, OPD officials said the man jumped into the atrium area of the airport Saturday morning. A statement from TSA officials said he fell, though they also said that it will be up to law enforcement to officially determine the cause of death.
check back here for updates


Some are connecting the shutdown and threat of another one as part of the reason.
This is from Click Orlando

The apparent suicide comes after a 35-day shutdown, in which TSA and federal employees went without pay.

"Our @TSA Officers have already suffered so much during the #GovernmentShutdown," Rep. Darren Soto posted on Twitter. "This apparent suicide only adds to tragedy experienced at Orlando Int'l. Our prayers go out to his family and coworkers after this difficult loss."

"TSA agents have some of the toughest jobs, and these public servants often sacrifice a lot in order to keep us safe at our nation's airports," Rep. Stephanie Murphy said. "My thoughts today are with his family and coworkers, and I wish them well during this difficult time."

"Terrible news from Orlando airport today with the death of a TSA agent," Sen. Marco Rubio said. "Please pray for the family and all impacted by todays horrible tragedy.​"