When they cannot even get the number right...how much do they really care? 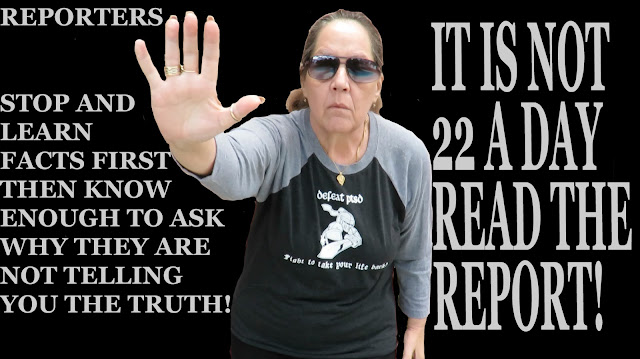 22 is a bogus number taken from the first suicide report from the VA, which was based on limited data from just 21 states!

How many times does it have to be proven that "suicide awareness" does only one thing. It lets veterans know that others have given up, along with showing how little the raisers actually care. Yes! If they cared enough they WOULD HAVE READ THE DAMN REPORT IN THE FIRST PLACE!

If they really cared, then they would be supporting established efforts that have actually been proven to not just prevent suicides but replenish hope!

What set me off tonight? Simple.


Walk for Hope aims to prevent suicide That just came out about an event yesterday! It seemed like a good idea in the beginning of the article but then I read this.

"And while the college student statistic can seem high, military veterans commit suicide at a higher rate. Every day 22 veterans take their lives. In a year that totals out to be 8,030 military lives lost to suicide."

First is we know the military suicides just reached a ten year high, so no, "awareness" did not even help them. The other factor is that while the VA reports on veteran suicides, we know how many are not counted, but they do not. They do not even seem to know that there are two sets of numbers and current military reports are 90 days old while the VA reports are two years old. This is why we know awareness does not work to convince them to stay alive.

Watch the video I put together a while back and then maybe you'll understand why this kind of stuff makes me sick to my stomach!

Posted by Kathie Costos at 7:29 PM