Marine thanks God he was caught

McCrabb: Why a Marine says being arrested was ‘one of the biggest blessings’ in guiding him to Middletown success


He called being arrested “one of the biggest blessings of my life. I’m glad God cut me down that day. God was fed up and he gave me over to the authorities.” 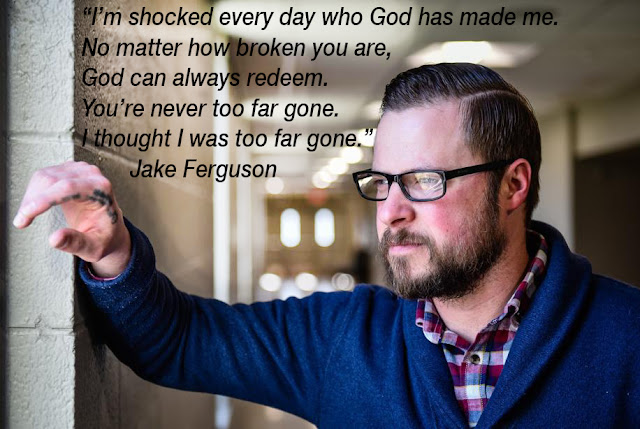 MIDDLETOWN — When Jake Ferguson heard a strange voice yell, “Mr. Ferguson,” he knew he was busted.

“There was a wave of fear,” he said. “I thought, ‘This is how it’s all going to end.’”Ferguson, a Marine recruiter in Bowling Green in 2012, had forged a prescription for painkillers at a Meijer pharmacy, and 15 minutes later, local police charged him with deception to obtain a dangerous drug, a felony.

If convicted, the Middletown native faced a court-martial from the Marines with a possible penalty of up to 18 months in prison, the loss of his military rank and pension and probably his marriage to Nicki.

The judge listened. The charge was suspended, and Ferguson was placed on one-year probation and told to seek therapy through Veterans Affairs.“Very blessed,” he said of his reaction to the judge’s leniency.Since then, Ferguson has received 2½ years of intense therapy — one year in Bowling Green and 18 months with the Wounded Warriors East Battalion in Jacksonville, N.C. — medically retired from the Marines in 2015, “surrendered his life” to Christ, worked as a counselor for more than three years with his wife at a church in North Carolina and recently was named Life Care Pastor at Berachah Church in Middletown.
read more here

If you want to know how to prevent military suicides....send this Marine to talk to them and you'll see change happen!