If politicians remain clueless about veterans committing suicide, how can they fix anything?

Over the course of the 17 years since 9-11, Ryan Peters of Hainesport made four separate overseas deployments as a Navy SEAL: to Iraq, Afghanistan, Iraq again, and to Central and South America.In the Middle East, he tested that virtue they inculcated at the Naval Academy called loyalty.

We know that ear worm of a number was based on limited data from just 21 states...but we also know that numbers without details mean creative accounting...much like all the bills and "efforts" created by people who did not take any of these suicides they care so much about...seriously enough to learn even basic facts.

I think he does care but needs an intelligence briefing before he can actually do anything to change the outcome! 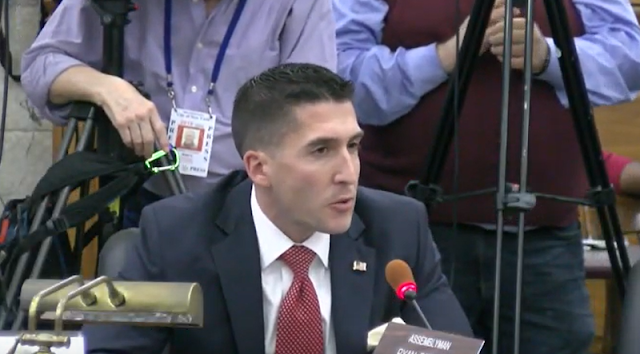 “The rate of veteran suicide is more than 1.5 times higher than the average population. That is a heartbreaking statistic,” said Peters (R-Burlington). ”These are men and women that fought bravely for their country and are coming home with the feeling of being left out of society.”

According to the 2016 VA National Suicide Data report, the rate of suicide was 1.8 times higher among female veterans compared to non-veteran adults and 1.4 times high in male veterans.

An average of 22 veterans a day commit suicide, according to the US Department of Veteran Affairs.

“The resolution aims to take the startling statistic of 22 veteran suicides a day and turn it into a rallying cry for us all to put more focus into our heroes returning home and for them to know we are there for them,” Peters said.

The resolution would make neon yellow the official color of veteran suicide awareness in New Jersey and call it “Vet 22”. Peters was approached by representatives of the nonprofit VALOR Clinic Foundation from Pennsylvania, who explained that attaching an awareness campaign and a bright color to veteran suicide awareness has helped the foundation connect veterans to services they didn’t know were available.

One VALOR Clinic program connects veterans suffering from depression with other veterans to help heal them through companionship and mutual understanding. Programs like NJ Vet2Vet are available in New Jersey to provide similar support-based treatment.

“Many times we return home and go back to the lives we used to live, and our world gets bigger and lonelier, and we don’t stop to think that there are men and women who have been through this before and can help us out,” said Peters, who served multiple combat tours overseas as a Navy SEAL.

“Let’s bring attention to the programs and support systems we have available locally, and let’s put more focus on the 340,000 men and women in New Jersey who have served our country because we can’t afford to have them slipping through the cracks when they re-enter society,” he continued.
Posted by Kathie Costos at 8:26 PM