Will Senate back building the wall or rebuilding military bases?

Camp Lejeune is still a mess 6 months after Hurricane Florence. Where's the money for repairs?


The Marine Corps' top general says one "negative factor" delaying repairs is the diversion of resources to the military mission at the U.S.-Mexico border. 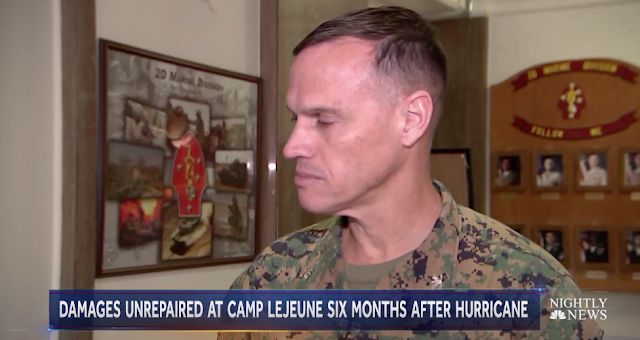 The Marines say they need $3.6 billion to repair the damage to more than 900 buildings at Camp Lejeune, Marine Corps Air Station New River, and Marine Corps Air Station Cherry Point caused by the storm and catastrophic flooding in its aftermath. And while they have torn down soggy, moldy walls, put tarps on roofs and moved Marines into trailers, so far they have not received a penny from the federal government to fix the damage.

Now the Marine Corps' top officer is warning that readiness at Camp Lejeune — home to one third of the Corps' total combat power — is degraded and "will continue to degrade given current conditions." In a recent memo to Navy Secretary Richard Spencer, Commandant Gen. Robert Neller cited, among other "negative factors," the diversion of resources to the border, where the Trump administration has sent active-duty troops to patrol and plans to use military funding to pay for a wall.


"Mister Secretary, I am asking for your assistance," wrote Neller in his memo, his second this year requesting that Spencer push Congress to provide more funds. "The hurricane season is only three months away, and we have Marines, Sailors, and civilians working in compromised structures."

Neller wrote that the lack of the money needed for repairs, and unexpected expenses like the U.S. military mission at the southern border, are "imposing unacceptable risk to Marine Corps combat readiness and solvency."
read more here


But it is not just Camp Lejeune

The U.S. Air Force says it needs $4.9 billion in new funding over the next two and a half years to cover the costs of rebuilding two air bases hit by natural disasters.
About one-third of Offutt Air Force Base, in eastern Nebraska, was underwater earlier this month as flooding hit large swaths of the Midwest. And Tyndall Air Force Base in the Florida Panhandle was hit hard by Hurricane Michael in October.
The Air Force is asking for $1.2 billion in supplemental funding for fiscal year 2019 and $3.7 billion for fiscal years 2020 and 2021. Congress would need to approve the funding.
Posted by Kathie Costos at 8:27 AM