No need to think too hard on this one. Considering there was a time when no member of Congress really wanted to serve on the Veterans Affairs Committee before it was turned into a money maker for anyone who can profit off their suffering, it is everyone's game now.

To think, these con-artists actually think they can get away with subjecting veterans to deplorable conditions by failing to fix the problems at the VA just for the sake of their rich buddies and fat retirement funds. 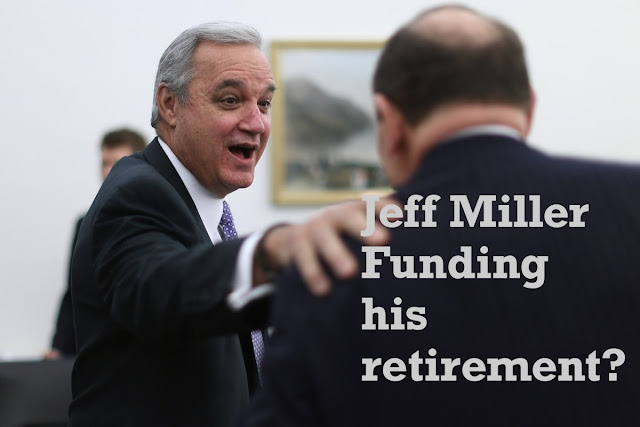 Why else would they be pushing to turn your care over to for profit companies instead of making sure you got the best care possible at the VA?

Read this story from NPR back in 2016 and see what he was up to back then...like this,

SIEGEL: Ten billion dollars put into Veterans Choice, and there are now more vets waiting for care than before. What do you do now? What's next? What happens?

MILLER: We continue to work with the department, with the secretary, with the veterans service organizations that are out there. I believe that many folks now accept the fact that Choice is going to be here. I think it's going to take some time. I mean, nobody expected this to be resolved overnight. You can go back and check the transcripts of most of the interviews, and nobody thought that it was going to be resolved immediately.


Hell, people like Jeff Miller could have saved a lot of lives and caused a lot less heartache had he not been more focused on his own retirement while he served as head of the House Veterans Affairs Committee. Now we know why!


Jeff Miller helped open up the VA to private contractors. Now he’s out of office and lobbying for those businesses.


The Indian Treaty Room is a grand two-story meeting space in the Eisenhower Executive Office Building next to the White House, with French and Italian marble wall panels, a pattern of stars on the ceiling and the image of a compass worked into the tiled floor. Over the years, it has hosted signing ceremonies for historic foreign policy pacts such as the Bretton Woods agreement and the United Nations Charter.

On Nov. 16, 2017, it hosted a different kind of gathering: an intimate meeting called by the White House to discuss the future of the Department of Veterans Affairs. In the 10 months since Donald Trump had taken office, his administration had been pushing a bold and controversial agenda to privatize more of the VA’s services.

The Trump administration’s ambitions are well documented. But what has not been publicly revealed until now is the extent to which the VA—a sprawling agency with a $180 billion (FY2017) annual budget that includes the nation’s single largest health care system, a network of cemeteries and a massive bureaucracy that administers the GI Bill and disability compensation for wounded veterans—has become a massive feeding trough for the lobbying industry.

The VA’s then secretary, David Shulkin, was at the previously undisclosed meeting, along with a contingent of conservative thinkers on veterans policy, including current and former members of Concerned Veterans for America, known as CVA, an advocacy network largely backed by conservative donors Charles and David Koch. Also present were “Fox & Friends” host Pete Hegseth, a former CVA executive repeatedly floated to be Trump’s pick for VA secretary, and David Urban, a right-leaning CNN commentator who served as a senior adviser on the Trump campaign.

According to emails obtained under the Freedom of Information Act, the group drafted a strategy to “echo/amplify” Trump’s “priorities/initiatives” for accelerating the privatization process. According to three people who were there, the participants discussed how best to respond to expected resistance from traditional veterans advocates, who historically have opposed privatizing key agency services. Representatives from “the Big Six” major veterans organizations, including the American Legion and Veterans of Foreign Wars, were not invited.

But it was the presence of the most powerful lobbyist for the companies now trying to get a piece of the VA’s budget—a tan, affable Floridian named Jeff Miller—that would have raised the most eyebrows, had his attendance been known at the time.


As the head of the House Veterans’ Affairs Committee, Miller helped write the very privatization legislation that opened the door to his lobbying operation. As an early Trump backer and a name repeatedly floated as a potential VA secretary, Miller personally shaped the president’s policy; he drafted the Trump campaign’s 10-point veterans policy paper, largely based on proposals he was unable to pass in his time on the Hill. (Moran said Miller also has communicated directly with Trump “on occasion” since joining McDermott.)
read more here

Posted by Kathie Costos at 3:26 PM