Florida Congressman gets it wrong on veterans committing suicide

Member of congress gets it all wrong on veterans committing suicide...

“So just in the last 18 months, 34 service members have committed suicide in a Veterans Affairs hospital or clinic — in the actual place that’s supposed to be taking care of them..."

That would be veterans...not service members.

"The nation’s suicide epidemic among veterans and active-duty personnel — 20.6 self-inflicted fatalities a day, according to the Department of Veterans Affairs"

VA suicide numbers do not include Active Duty. They retracted the statement saying that they were included due to the fact that would mean the DOD was wrong when they were reporting an average of 500 a year.


“So just in the last 18 months, 34 service members have committed suicide in a Veterans Affairs hospital or clinic — in the actual place that’s supposed to be taking care of them ... And if anybody here has a solution to that problem, or ways we can identify service members who are in a higher risk for that category ... I’m all ears to that.” 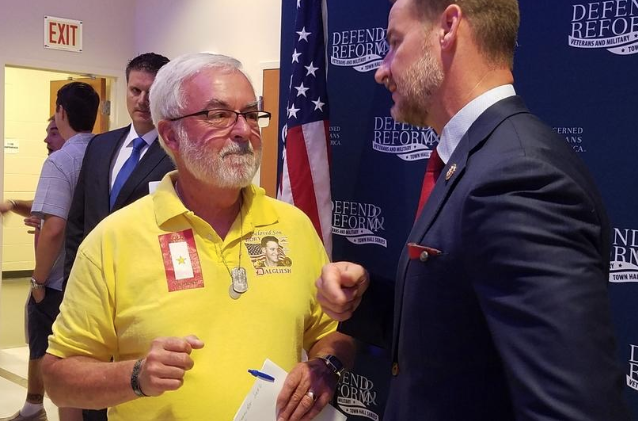 “And I think you’d be surprised by the amount of Republicans that would support it,” said the Sarasota Republican, who added Senate Majority Leader Mitch McConnell would likely block a descheduling bill. But Steube said a vote would enjoy broad bipartisan support in the House and could come up for a vote this session.

“I think as you’re seeing a younger generation of elected officials — I mean, look at (Florida Gov. Ron) DeSantis and some of the things he’s done — and their positions on those issues are very different.”

Steube’s remarks followed a town hall meeting sponsored by Concerned Veterans of America at the Suncoast Technical College Conference Center. The nation’s suicide epidemic among veterans and active-duty personnel — 20.6 self-inflicted fatalities a day, according to the Department of Veterans Affairs — cast a shadow across the forum, even as many gathered to hear about the latest wrinkles in the Mission Act.

Passed in 2018 to give veterans better access to VA health care, the new regulations will go into effect on June 6. The new law allows patients who’ve been waiting for more than 20 days or who drive more than 30 miles to enter a VA facility to visit a community doctor closer to their residences. The expansion is huge, as it opens new avenues of services to roughly 40 percent of the veteran population. Under current rules, just 8% of veterans have those options.

But solving the suicide epidemic has no easy fix, as Steube told a crowded meeting room. In fact, there’s so much misinformation about what veterans in Florida and other medical marijuana-legal states are liable for with their medical-cannabis prescriptions, the House freshman said he intends to introduce a bill to codify protection for veterans whose urinalyses may test positive for marijuana.

“The directive is, you can’t be denied VA services, but I’ve heard from veterans in my own district who say they’ve been told otherwise ... So I have a bill to make it law that if you live in a state that has lawfully opened up medicinal marijuana and you have a recommendation for a prescription ... you cannot lose those VA benefits.”

A member of the House Veterans Affairs Committee, Steube calls the suicide epidemic a crisis that can’t ignore any potential remedies. He says the VA is trying to be proactive in its screening procedures, but the numbers continue to skyrocket.
read more here

On the medical pot thing, that is correct and a lot of doctors with the VA would prefer to give their veterans it instead of most of the drugs that actually come with warnings of increasing suicidal thoughts...
Posted by Kathie Costos at 4:57 PM