Fred Franks, a retired U.S. Army general, reflects on his more than 35 years in service

Naples veteran committed to service after decades in the military

A four-star army general with a storied military career from Vietnam and beyond lives right here in Southwest Florida. Twenty-five years into retirement, he remains committed to fulfilling the trust that’s owed to all who serve. 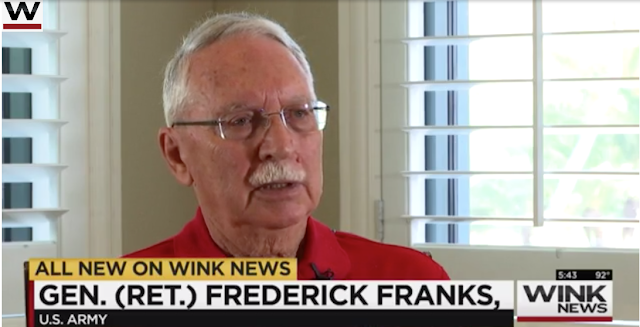 Fred Franks, a retired U.S. Army general, reflects on his more than 35 years in service.

In 1970, Franks was wounded in Cambodia. His leg was amputated from below the knee, but it was not long before he went back to active duty in the combat unit.

“I really wanted to stay in the Army,” Franks said. “I didn’t want to do anything other than be a soldier.”

But when soldiers returned from Vietnam, there were no parades, only protests against an unpopular war like at the 1967 national rally in Washington D.C. Soldiers got caught in the crossfire of blame, and their trust in military officials and the American people were broken.

“Duty, honor, country, didn’t it mean anything?” Franks said. “These young people went, did what our country asked. So that lit a hot blue flame in me. That for the rest of my service, for the rest of my life, I would devote myself to seeing to it that trust was never fractured again.”

Gen. Franks is best known for serving in Operation Desert Storm during the Gulf War and leading the VII Corps of the U.S. in a famous maneuver that forced the retreat of the Iraqi Army.

“What we call the left-hook attack,” Franks said. “There wasn’t a day on Desert Storm that I didn’t remember my fellow veterans.”

Through he retired in 1994, Franks never stopped thinking about the troops, especially those returning from war with both visible and invisible wounds.
read more here

REMINDER
Vietnam is still the longest war to anyone paying attention!

Vietnam War, (1954–75), a protracted conflict that pitted the communist government of North Vietnam and its allies in South Vietnam, known as the Viet Cong, against the government of South Vietnam and its principal ally, the United States. Called the “American War” in Vietnam (or, in full, the “War Against the Americans to Save the Nation”), the war was also part of a larger regional conflict (see Indochina wars) and a manifestation of the Cold War between the United States and the Soviet Union and their respective allies.


The last deaths came in 1975 and here is the first name added.