What the Dems need to know about veterans

What should the next president know about veterans?

For the last couple of nights I tried to make it through watching the Democrats debates, but ended up changing the channel.

How is it that they have missed what our veterans actually want in return for their service? 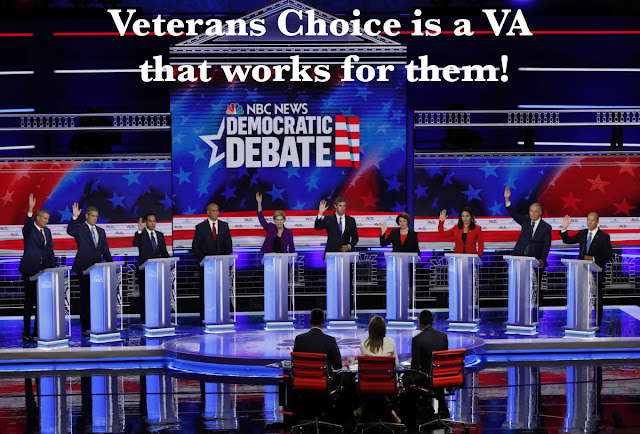 PBS News Hour
We heard a lot about how awful civilian healthcare system is. We know that, since we live with it all the time. So how is it that none of them managed to acknowledge that sending disabled veterans into that system subjects them to the same problems they are already dealing with in the VA system?

It puts them into a long line of patients who were there before them. New patients always have to wait for first appointments.

It makes them wait even longer to see a specialist, if they find one willing to deal with the VA.

What makes all this even worse is the fact that civilian doctors do not understand military culture or their unique healthcare needs.

This is not a new issue for them. It was one of the reasons the VA started in the first place. Veterans are not civilians and their wounds, the healthcare issues that created the disability originated with their service to this country. In other words, they pre-paid for their healthcare.

Taking a look at the civilian healthcare system, their track record is too unreliable to subject veterans into that system.

While current military and veteran suicides have increased, the suicides in the civilian population have gone up as well.

Suicide rates among people 15 to 64 increased significantly during that period, rising from 10.5 per 100,000 people in 1999 to 14 per 100,000 in 2017, the most recent year with available data, according to annual research published by the US Centers for Disease Control and Prevention's National Center for Health Statistics..."

How is it possible that President Trump and members of Congress thought it was a good idea to send veterans into worse care instead of fixing the VA?

How are they not ashamed to admit how little they know about our veterans unique needs?

We deal with insurance companies deciding what care they will pay for instead of what doctors decide is necessary.


A doctor who he thought worked for VA, but was actually an independent contractor, botched his diagnoses delaying treatment for months. In the meantime, his condition became so grim that he feared for his own life. According to documents obtained by Connecting Vets, the hospital openly admits that Tally received second-rate care while at a VA emergency room in Loma Linda, Calif., about 56 miles east of Los Angeles.

But they can sue the VA if their care was provided by the VA.

PTSD is something that over 7 million Americans are suffering from, but the President thinks private doctors should also take care of veterans dealing with PTSD combat caused? They cannot even take care of the first responders suffering from what their jobs did in their own communities!


This "choice" is not what the veterans want or deserve from any president! They want a VA that works for them!