The military veteran, who lost his leg after an IED exploded, adopted a dog who had lost its leg


Puppy with Missing Leg Adopted by Amputee Veteran: 'It's Impossible to Not Smile Around Him' 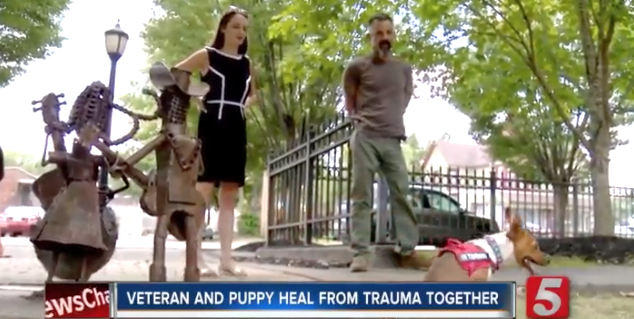 “It’s impossible to not smile around him,” Ferguson said. “Everybody’s so happy to see him, then they notice he’s got 3 legs. He’s happy you were overjoyed to see him, don’t pity him!”

A military veteran from Tennessee who lost his leg after an IED explosion found a new best friend after adopting a dog with a missing leg.

Joshua Ferguson took home three-legged Scooter on Thursday, after adopting the pup from the Humane Society of Dickson County in Dickson, according to WTVF in Nashville.

“He makes it easier for me to remember, hey it’s still a beautiful day,” Ferguson said Scooter. “You realize really just how tremendous a journey life is.”

Scooter was discovered with a severed leg in a wooded area at Johnson Creek near Burns, Tennessee, in June, with veterinarians believing the dog got his leg stuck and was forced to gnaw it off in order to free himself and find food, WTVF reported.

The dog’s mangled leg was eventually amputated at the Animal Medical Hospital.
read it here
Posted by Kathie Costos at 5:13 PM