Congress did not invite Point Man to PTSD round table?

One of the first groups working on spiritual healing of veterans, was not invited to table?


Definition of point man 1: a soldier who goes ahead of a patrol 2: one who is in the forefront 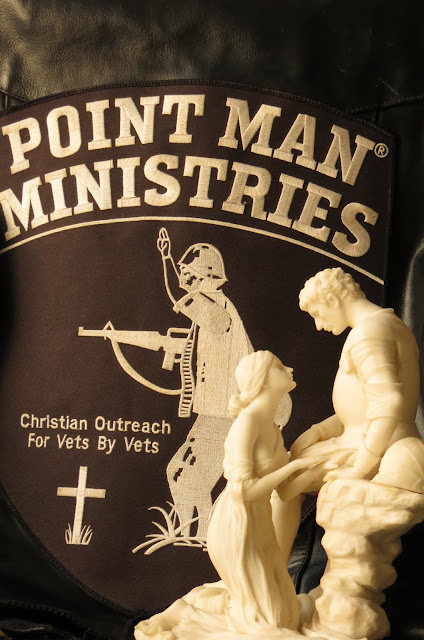 Any idea how many people will read Congress Holds Forum Discussing Potentials of Faith-Based Programs Helping Veterans Suffering PTSD and actually believe it is something new?

To say I am disappointed right now, would cause God to smack me in the head. He knows how angry I am about reading Congress has yet again, held a meeting with "faith base" groups working on PTDS. Why? Because on of the first groups to do this work, proved it worked back in 1984 and has been proving it every day since then!


Since 1984, when Seattle Police Officer and Vietnam Veteran Bill Landreth noticed he was arresting the same people each night, he discovered most were Vietnam vets like himself that just never seemed to have quite made it home. He began to meet with them in coffee shops and on a regular basis for fellowship and prayer. Soon, Point Man Ministries was conceived and became a staple of the Seattle area. Bills untimely death soon after put the future of Point Man in jeopardy.
However, Chuck Dean, publisher of a Veterans self help newspaper, Reveille, had a vision for the ministry and developed it into a system of small groups across the USA for the purpose of mutual support and fellowship. These groups are known as Outposts. Worldwide there are hundreds of Outposts and Homefront groups serving the families of veterans.
PMIM is run by veterans from all conflicts, nationalities and backgrounds. Although, the primary focus of Point Man has always been to offer spiritual healing from PTSD, Point Man today is involved in group meetings, publishing, hospital visits, conferences, supplying speakers for churches and veteran groups, welcome home projects and community support. Just about any where there are Vets there is a Point Man presence. All services offered by Point Man are free of charge.

We started working with Vietnam veterans and their families but did not shut the door to older veterans dealing with the same spiritual battle caused by war. We did not cut off the newer veterans from entering into our groups. The current President of Point Man, Paul Sluznis is an Iraq veteran.


Many of us had no idea where to go or who to talk to when we came home from our different conflicts. We had no clue we had PTSD or anxiety. Who thought they would still be clearing their own home 15 years after getting out of the military. I had no idea how to deal with any of these issues till my Bride found out about Point Man Ministries and I haven't looked back since.

Yet during the roundtable, this was said.


“We have been throwing millions of dollars into the military suicide issue, and many other military behavior health issues. The statistics keep getting worse and worse. We are not doing something right. We need to integrate faith-based solutions,” commented retired U.S. Army Maj. Gen. Bob Dees after the forum. Dees was also the former vice director for operational plans and interoperability for the Department of Defense (DOD). He also asserted that the faith-based solutions are incredibly important to veterans and the military. “I have found as a senior military commander over the many years that is what really works. We have got to heal not just heart and soul, but the very spirit of each one of our men and women wearing our nation’s uniform,” he stated.

They would not have had to throw "millions of dollars" as he mentioned had they actually looked to find groups that were not doing it for money or fame. As for the "millions" it is actually billions per year when you factor in all the groups taking in huge sums of donations.


Three faith-based veteran PTSD programs with successful track records were invited to present their stories and past experiences to the forum. They were Mighty Oaks Foundation, Reboot Recovery, and Operation Restored Warrior.

“A spiritual wound of a war needs a spiritual solution,” said Chad Robichaux, the founder of Mighty Oaks Foundation. He expressed after the forum that “I walked away very encouraged seeing that we have Congressional leaders who share our passion for our warriors, and also share our ideas.”

We don't just have the knowledge and plans in place to do this work, but have proven it all along. Any idea what the outcome would have been if anyone asked us to the table when the reports first came out?
Posted by Kathie Costos at 3:53 PM