Disabled veteran fought for his service dog rights...and all others

The county recently reached a settlement in the suit that requires posting “service animals are welcome” at all 200 or so of its parks. The county must also ensure that information about service animals is included in annual employee training about accommodations required for disabled people under federal and state law. 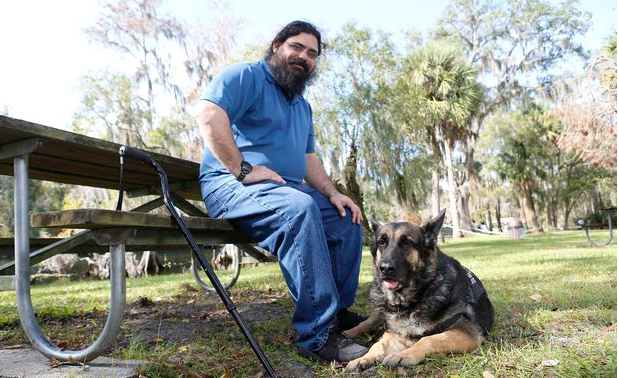 Cesar Silva and his 7-year-old service dog Sophia visit Rotary Riverfront Park in Temple Terrace on Tuesday. A disabled Iraq war veteran, Silva takes Sophia with him everywhere but ran into trouble with a park ranger during a 2016 visit to Veteran’s Memorial Park. [OCTAVIO JONES | Times]

It started with a heated encounter between Cesar Silva, who has disabilities, and a park ranger. Silva helped bring about the same changes at city parks in 2013.

A disabled Army veteran, Silva struggles with post-traumatic stress disorder and physical injuries that affect his balance. Sophia is trained to get help if he falls. She will gently nudge him and distract him when he’s overwhelmed.

Sophia was with Silva when he and partner Samantha Tapia visited Veteran’s Memorial Park and Museum on U.S. 301 in Tampa in May 2016. Their arrival caught the attention of park ranger Roger Cramer who questioned why Silva had parked in a disabled spot and why Sophia, wearing her service dog vest, was not on a leash.

Silva, 38, has a disability symbol on his license plate. He explained that he doesn’t always use a leash because his balance problems put him at risk of falling, an exemption allowed by state law.

That did not satisfy Cramer, according to Silva. As the discussion became heated, Cramer called the couple combative and refused their request for his name and title. Tapia said she felt afraid and called the Hillsborough County Sheriff’s Office.
read it here
Posted by Kathie Costos at 9:51 AM