Female veterans #BreakTheSilence and get your service on equal footing

Yesterday I posted on PTSD Patrol about female veterans service being overlooked. Too many times people have assumed that when you mention a female veteran with PTSD, they try to point to military sexual assaults. Not that they do not happen, but no one jumps to that conclusion when a male veteran has PTSD, even though they get attacked too.

As you can see in this recent report, it happens to males as well as females.


The US military is reporting a disturbing spike in the number of active-duty service members who said they’d experienced sexual assault last year, raising questions once again about the military’s handling of misconduct.
The Pentagon estimates that about 20,500 service members across the military branches — about 13,000 women and 7,500 men — were sexually assaulted in the 2018 fiscal year, based on data from an anonymous survey that’s compiled by the Department of Defense every two years.
That’s a four-year high — and an alarming jump from 2016, in which 14,900 service members said they had been sexually assaulted. VOX.com

Yet the public assumes that PTSD caused by combat situations in females, on top of everything else, does not happen.

There are, sadly still, too many things that are getting worse while it seems as if more is being done claiming to change all of it.

Things our politicians do, do not work, then everyone wants more done. Huge problem when it is all more of the same and the worst outcome spreads out! If you are a female veteran, or currently serving, use your voice and make sure that your service is honored, your wounds are tended to and you get the help you need to live a better quality of life. #BreakTheSilence

Why do women wonder when their service will count?

We read about it all the time. A couple is sitting together, both wearing military hats, yet it is only the male who receives a "thank you" for his service.

Someone forgot to inform the "thanker" that women have served this country since before it was a country.

The Reserve Components are federal forces. Guard components play dual state and federal roles. Like most of the active forces, the Reserve and Guard components have an increasing percentage of women in their ranks. As of February 2018, women constituted 158,090 or 19.8 percent—of all personnel serving in the six DoD Reserve and Guard forces. Women number 1,067—or 17.4 percent—of all personnel serving in the Coast Guard Reserve.

Women have been bestowed with every military medal for heroism, including the Medal of Honor. Dr. Walker not only served during the Civil War, she was a POW. 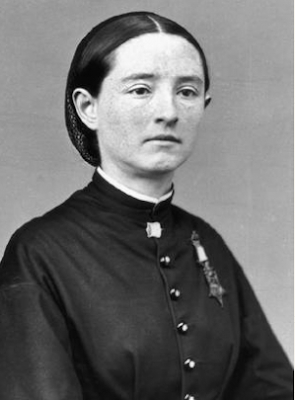 Released from government contract at the end of the war, Dr. Walker lobbied for a brevet promotion to major for her services. Secretary of War Stanton would not grant the request. President Andrew Johnson asked for another way to recognize her service. A Medal of Honor was presented to Dr. Walker in January 1866. She wore it every day for the rest of her life. read it here