“You just don’t expect this to happen at home…But it did and it has,” Sheriff David Morgan said. 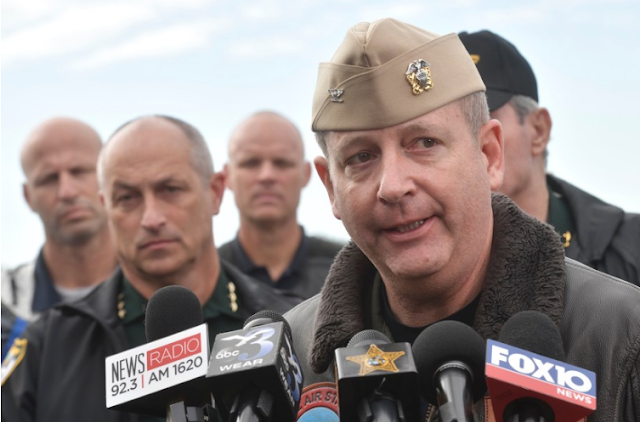 Navy Capt. Tim Kinsella briefs members of the media following a shooting at the Naval Air Station in Pensacola, Fla., Friday, Dec. 6, 2019. A U.S official told The Associated Press that the suspect was a Saudi aviation student, and that authorities are investigating whether the shooting was terrorism-related.
TONY GIBERSON/PENSACOLA NEWS JOURNAL/AP


WASHINGTON — A member of the Saudi Arabian air force opened fire Friday morning in a classroom building at the Naval Air Station Pensacola, Fla., killing three and injuring several others, according to local and law enforcement officials.

The aviation student, who was fatally shot by an Escambia County sheriff's deputy, was a second lieutenant in the Saudi air force, two U.S. officials who spoke on condition of anonymity told The Associated Press. The officials said authorities were investigating whether the attack was terrorism-related.

Seven other people were injured in the shooting, including two sheriff deputies, Chief Deputy Chip Simmons of the Escambia County Sheriff’s Office said. One deputy was shot in the arm and the other in the knee, and both are expected to survive, he said.

The shooter used a handgun and all of the shooting took place in one classroom, authorities said. Capt. Timothy Kinsella, the commanding officer of NAS Pensacola, noted weapons are not allowed on the base.
read it here
Posted by Kathie Costos at 5:55 PM