Get rid of the reason they are suffering instead of healing


Today Martin Kuz asked a question on the Christian Science Monitor "Can veterans lead the way on preventing suicide?" but apparently, much was missed. The premise of the article seems to have been focusing on guns instead of acknowledging the fact that given the rate of suicides in the veteran community, the known numbers anyway, has gone up, this is an odd place to start.


"Guns rank as the most lethal method of suicide, with 9 in 10 attempts proving fatal. Almost 70% of veterans who take their own lives use a firearm – compared with about half of civilians who die by suicide – and one-third of former service members store guns loaded and unlocked in their homes."

Kuz began the subheading with this.


"WHY WE WROTE THIS Highly regarded in society, veterans hold the potential to help bridge America’s divide over firearms by recasting the debate as a public health issue."

Yet it seems he missed the point.


"Suicide rates for veterans and the overall population have climbed over the past 20 years, and more than 6,100 former service members died by their own hand in 2017. Mental health researchers suggest that, given the public’s esteem for veterans, the VA campaign holds potential to influence civilian attitudes about lethal means safety as a deterrent to suicide. “Veterans are venerated in our society,” says Dr. Joseph Simonetti, an assistant professor at the University of Colorado School of Medicine who has studied gun storage habits among veterans and civilians. “To the extent that they make changes in their approach to gun safety, that could have an effect on the rest of the country.”"

How can veterans with a higher suicide rate, mostly committed by the use of guns, lead the way on preventing them in the civilian world?

Actually they not only can, but they should. The thing is, they cannot do it from where they are right now.


"In response, the VA has sought to promote firearm safety as part of its campaign to reduce suicide risk, urging veterans to consider precautions that include gun locks, removing a gun’s firing pin, or storing firearms outside the home."

There was a bill passed by Congress and signed by President Bush in 2007 addressing suicides and linking guns to it. The Joshua Omvig Suicide Prevention Act was supposed to "prevent suicides" but as we have witnessed, higher number of suicides happened within the military community as well as the veteran community, just as they also went up in the civilian population.

Taking away guns does not prevent suicides. They just choose another way to do it. It would make a lot more sense to get rid of the reason they are suffering instead of healing.

The thing that most people miss is that when someone joins the military, they train to do whatever is necessary to save the lives of those they are with. Civilians do not do that, for the most part, but we have seen many times when they also put the lives of others ahead of their own.

If we cannot get those individuals to recognize that fact, then how can we get the average person to see that there is nothing wrong with asking for help. It is only wrong when the help they need is replaced by what has already failed.

We know that addressing PTSD needs to begin as soon as possible after "it" happened. The sooner, the more healing can happen but even after decades, there is recovery happening. It has to include mental health help, taking care of the physical reactions and above all else, the spiritual needs of the survivors.

As for the rest, Kuz also must have missed the point that the civilian world already received lessons from veterans. It came in the form of all the research done on what trauma does and that was provided by Vietnam veterans coming home and making all that possible way back in the 70's. 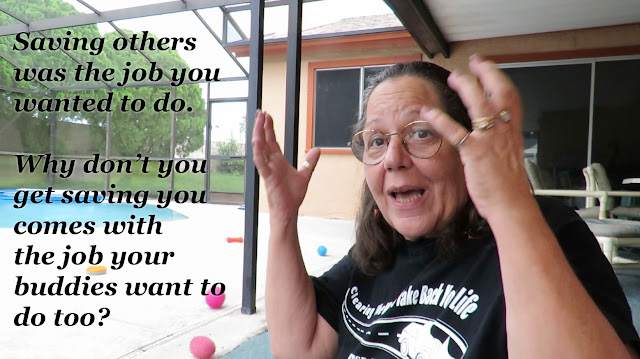 Posted by Kathie Costos at 7:51 PM