Counting more suicides because they could not count on us

I have been thinking a lot about "And ye shall know the truth, and the truth shall make you free" John 8:32 but there has not been much truth telling going on and instead of setting veterans free from their pain by helping them heal, we have succumbed to slogans. How is it that anyone has been so oblivious they actually believe reminding veterans they are killing themselves is a good thing to do?

Seems it would be a lot wiser to tell veterans the truth that can set them free to heal PTSD after service instead of committing suicide. 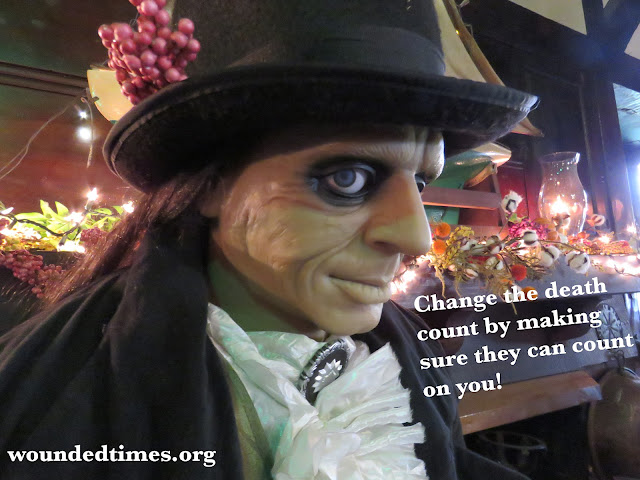 It isn't as if no one has tried, or pretended to do so, but far too many have failed. The evidence of this is clear. We have we been reading headlines like this for decades. "Lawmakers seek answers on rising military and veterans suicide rates" and then end up reminded of how it has all gotten worse.


The DoD’s 2018 Annual Suicide Report, released in September, found the suicide rate for active-duty U.S. service members in 2018 was 24.8 deaths per 100,000 troops, the highest on record since DoD began tracking suicides closely in 2001.

What that article does not point out is that there was another headline "obtained by the Associated Press" declaring that suicides were at a 26 year high. Well, that number was 99 and the year was 2006 when they committed suicide.

Who offered an apology to Teri and Patrick Caserta after their son Brandon committed suicide? Who gave excuses to other parents after all these years?

Joshua Omvig committed suicide and his parents fought like hell to get the government to do something about saving those who serve. President Bush signed the bill in his name in 2007. No one can explain what happened to all the other bills that followed year after year while the number of those serving, and those who became veterans, continued to climb. No one has been held accountable as more grieving families pleaded with the government to do something that would actually turn things around.

I have been asking why the press was not on suicide watch since 2007, because once they do a report, they seem to lack the ability to retain any of it. It is for sure no editor has assigned the task of putting it all together as if any of it really matters.

More and more groups pop up, get their publicity while apparently never taking any of it seriously enough that they actually manage to change a damn thing. Oh, excuse me. They do manage to change their bank accounts while they fabricate suicide figures and facilitate the ear worm penetrating so deeply veterans cannot fathom possibilities of healing waiting for them.

The press loves to cover feel good stories of the stunts almost as much as they seem to want all the grizzly details of those who took their own lives. What they do not seem too interested in are facts, or reporting anything that will make a difference. How about first telling them the truth about all the lies they have been fed? How about letting them know that they can heal PTSD and their lives can be so much better? How about all the groups claiming to care actually start to do the work necessary to let them know they really do matter and are worthy of the time it takes to change their lives?

That won't happen until we are brave enough to tell the truth and stop settling for BULLSHIT!