Crickets found microphones to share good news you can use. You can heal PTSD!

If you think that what you have heard about veterans committing suicide is useful information, think again. The only ones benefiting from it are the people raising funds for doing it. Everyone else is being reminded that others have given up, instead of learning how to fight back.

The help they needed to heal has been available for almost 4 decades, but the noise on social media is all about raising awareness that veterans are committing suicide while passing around a fictions number as if it is supposed to mean something. The only number that really means anything is the ONE who could not be reached in time to save them.

LADY MACBETH "I heard the owl scream and the crickets cry. Did not you speak?"


Time for more owls to teach crickets how to scream! 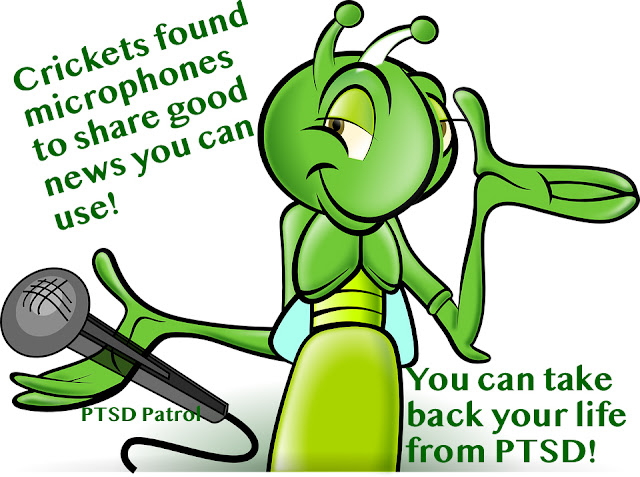 With my work on PTSD, it usually comes up at the strangest times. When I was with my family for Christmas, we got into a conversation about when my ex-husband tried to kill me. Not a very pleasant subject for what was supposed to be a joyous day, but it turned out to be a lesson on healing.

When the police took my ex out of the apartment somehow I knew it was just the beginning of a nightmare. Shock wore off and I went into survivor mode fully prepared to fight whatever he had in mind.

I had nightmares and flashbacks, mood swings and everything else that goes with surviving traumatic events like that. The thing that I could not overcome was paranoia.