Want to prevent veterans from killing themselves? Bobby Grey is an example of how to do it!

PTSD Nearly Killed Him - Now it's Helping Him Help Other Veterans

The scar on Bobby's neck lasted for weeks.

The scars on his heart have lasted much longer.

He's also a former Marine, 2003 to 2007 -- a mission that has given him great pride and great anguish. Twelve years later -- anguish or not -- he still loves the Corps to the core. Semper Fi -- always faithful.

Grey acknowledges, though, that that's where the scars originated. 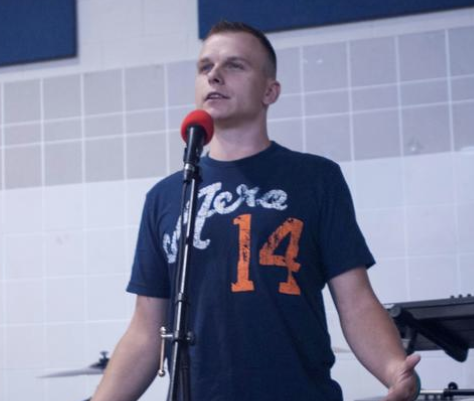 North Carolina Marine veteran, Bobby Grey, discusses his suicide attempt seven years after an explosive Iraqi attack on his unit during Post-Traumatic Stress Disorder Day at the Charlotte National Guard Armory on July 26, 2014. Grey said he had no memory of the suicide attempt when he awakened from a coma a week and half later. He tells his story to bring attention to the severity of the disorder so fellow comrades can seek help. (Ruth McClary/National Guard)

As a young devil dog, a PFC scarcely six months out of boot camp, Grey deployed to Iraq and got his first taste of combat when he was only 20 years old. One day, Marines in his convoy -- guys he knew -- died when a roadside bomb blew up beneath them. On another day, during a firefight with Iraqi insurgents, bullets whizzed over Grey's head, close enough that he could hear them. Seconds later, when the bullets shattered the windows behind him, a shower of glass rained down on his head.

But those days were nothing compared to Dec. 3, 2004, the day a suicide bomber rocked his unit's base with an explosion so violent that it literally blew him out of the chow hall where he'd been dining. He suffered a concussion and a mild traumatic brain injury -- as if anything traumatic could be mild -- but several comrades fared worse, suffering broken bones and dislocated hips. Two of his buddies died in the blast, and Grey had to put them in body bags himself.

These are the memories Grey brought home from Iraq, carrying them around like a rucksack on his back. Also in that invisible rucksack, Grey lugged PTSD -- post-traumatic stress disorder -- a mental and emotional condition which, though common among active military personnel and veterans alike, he knew little about and even denied having.

Six and a half years ago, that denial nearly killed him. When the PTSD that had been simmering inside him for years suddenly exploded, Grey snapped. After an argument with his wife, Kia, he stormed out of the couple's house in Thomasville, climbed a magnolia tree in the backyard, texted his wife an apology, and hanged himself with an extension cord. He only survived because of Kia's screams when she found him, a neighbor with a ladder who helped cut him down, and Kia's frantic CPR efforts as she waited for paramedics to arrive.
read it here
Posted by Kathie Costos at 7:03 PM