Suicide or murder? Death of Iowa veteran in Montana in 1921 raised questions


“A wound made by a large caliber bullet extended clear through the skull, there were no powder marks and the coroner expressed the opinion that it would have been impossible to have held a heavy revolver far enough away from his head to have left no powder burns. The bruised condition of the man’s knuckles indicated he had been in a fight,” The Gazette reported. 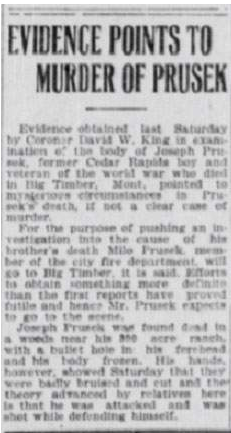 This April 11, 1921, Gazette story was headlined, “Evidence points to murder of Prusek.” One of Joe Prusek’s brothers went to Montana, attempting, without success, to get more details about his brother’s untimely death. (Gazette archives)

At the time, his daughters Mary, Lillian and Harriet and son Milo lived in Cedar Rapids, but his son Joseph Jr., or “Joe,” had moved to Montana in 1914.

Joe staked a claim near Briley in south-central Montana near Big Timber.

He joined the Army’s 88th Division in 1917 during World War I and went to France. He was assigned to the 77th Division, where he was part of the Lost Battalion that was surrounded by German troops in the Argonne Forest.

The battalion was rescued Oct. 7, 1918, after enduring more than four days without food or water. Attempts to get water to the soldiers were met with sniper fire, so the troops subsisted on leaves. At one point, they were targets of friendly fire until a message delivered by homing pigeon alerted the Allies they were firing on their own.

Having survived that horrendous ordeal, Joe was discharged and returned to his Montana home. That’s where he was when, at age 32, he died from a gunshot wound to his head.

His body was found April 5, 1921, outside his Montana cabin.
read it here
Posted by Kathie Costos at 7:32 PM