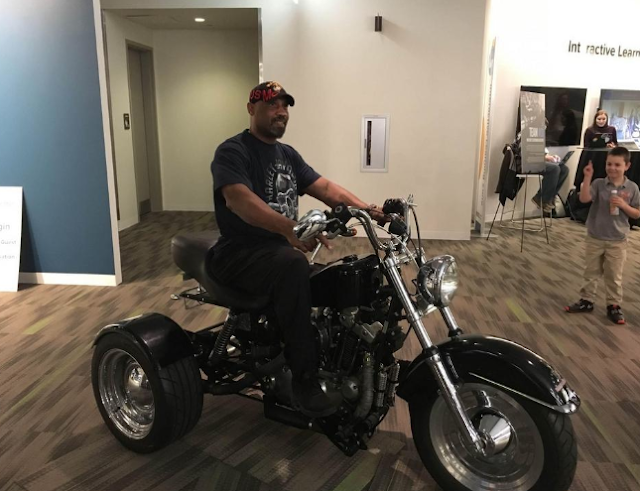 Charles Zollicoffer on the trike he received from CAMVETS

More importantly, he said, the fall program renewed his faith in humanity.

“I was left for dead on the side of the road,” he said. “So, during my time in this last seven or eight years, I have lost a lot of faith in people. A lot.”

In 2011, a drunken driver pulled in front of Zollicoffer’s 1995 Kawasaki motorcycle on state Route 800. The now retired U.S. Marine Corps and Army National Guard veteran had completed three tours in Iraq and was scheduled for deployment to Afghanistan.

Another person came across the early morning wreck and stopped to help. Zollicoffer, a 53-year-old Canton resident, spent months in a coma and had his left leg amputated at the hip.

This past Veteran’s Day, he received a modified trike at the Makers For Veterans closing ceremony. His family’s safety concerns had kept Zollicoffer from pursuing a costly trike, but they talked and accepted what it meant to him beforehand.

“I can’t even describe the feeling, when you get that wind blowing through your hair,” joked Zollicoffer, who has a shaved head. read it here
Posted by Kathie Costos at 10:02 AM